Shares of Targa Resources (NYSE:TRGP) plunged in November, falling 15.2% for the month, according to data provided by S&P Global Market Intelligence. Weighing on the midstream company was a sell-off in the oil market, which offset its impressive third-quarter report.

Targa Resources' third-quarter results were the strongest in its history. Overall, the company generated $287.2 million in cash, which more than covered the $231.5 million it paid out in dividends. That strong showing put the company on track to exceed its full-year forecast. 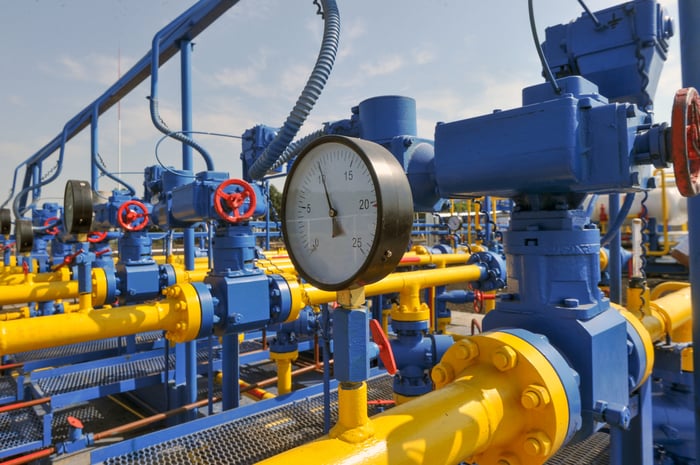 One of the reasons Targa Resources' third-quarter results came in ahead of expectations is because oil prices were higher than expected. While Targa Resources doesn't produce any oil, it does have exposure to crude pricing through its natural gas processing business, where it earns a commodity-based margin by selling the natural gas liquids it produces, which derive their value from the price of oil. Currently, Targa Resources gets about 35% of its earnings from commodity-price margins, which is a much higher percentage than most midstream companies, with many aiming to get that number below 10%. As a result, last month's 22% plunge in crude prices will impact the company's cash flow going forward.

Targa Resources is working hard to reduce its direct exposure to commodity prices by investing to build assets that generate more predictable fee-based cash flow. As those projects come on line over the next year, they'll reduce the volatility of its cash flow, which will provide more support to its 8.1%-yielding dividend. However, shares could remain under pressure until that happens -- especially if oil continues declining.