In mid-November, Verizon opened up spaces in Sacramento and Indianapolis showcasing 5G. Another two opened in Houston and Los Angeles on Dec. 3. These new Verizon "stores" don't sell anything per se, but they do demonstrate to the general public for the first time what this new network technology is all about.

Dubbed the 5G Experience Labs, each of these new Verizon stores is set up with a mock living room to show off what the new network can achieve at customers' homes. The most obvious demonstration is data streaming, as each successive iteration of mobile network has gotten faster. This time around, ultra-high-definition 4K video streaming is possible -- not just for smartphones, but on TVs, too.

It's not just faster speeds that 5G offers; Verizon also thinks its service can transform the whole cinema experience. Another demonstration -- a virtual reality experience set up in a Positron chair -- re-creates and immerses the user in Neil Armstrong's moon landing. 5G also opens up new video game capabilities, bringing multiplayer gaming previously only possible on a console or PC to mobile devices, via streaming from a cloud service.

Another demonstration could have implications for the workplace. Basketball players can shoot hoops with blackout VR goggles on. Cameras and sensors on the goggles help the player shoot accurately even without actually "seeing" the hoop. With 5G, it's possible that even complex work tasks could be accomplished remotely, as Verizon has tested with National Basketball Association players and with its VR basketball hoop challenge at the Experience Labs. 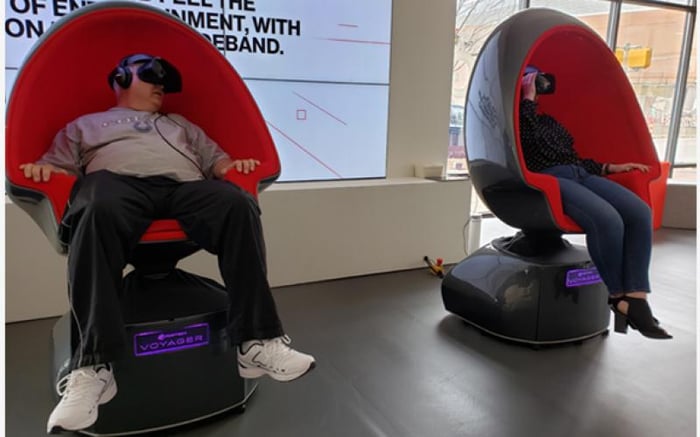 High speeds coming to a city near you

Verizon's goal for these "stores" is obvious: Convincing consumers about the capabilities of 5G could lead to a purchase. In its first four markets, 5G Home runs at $50 a month for Verizon wireless customers, and $70 a month for everyone else.

No specifics have been mentioned as to when other cities will get 5G, but Verizon says it is ready to get aggressive with new rollouts in 2019. America's biggest telecom is the first to offer a commercial 5G service, and the Experience Labs could be a good way to solidify that lead as competitors are racing to bring their services to market as well.

AT&T has laid out plans to bring 5G for smartphones to a number of U.S. cities through 2019. T-Mobile and Sprint are hanging their argument for a merger in part on 5G deployment plans -- a task the two contend would be difficult to accomplish by themselves.

Of course, the expansion of 5G all depends on hardware being up to the task. Fortunately, chipmakers like Qualcomm and Skyworks Solutions are on it. Qualcomm already has a portfolio of chips available enabling 5G connections in phones and other devices, and Skyworks has its Sky5 platform for 5G antennas. With the underlying technology ready to go, the race to get 5G to the public has begun.

Now it becomes a game of convincing consumers to sign up as the new network becomes available. It will take years for coverage to reach the scope that the current 4G network has reached, especially considering the millions of small-cell antennas that will be needed to bring access to most of the country's population. Verizon has monetized 5G first, though, and is now getting a head start in bringing touch-and-feel 5G stores to consumers. Thus, my bet is that Verizon will maintain the industry leadership it currently has into this new era of internet mobility.