"The trend is your friend." Investors have long used that saying in reference to stock price trends. But there's another way that trends can be very beneficial for investors.

Megatrends are major waves of change that create a far-reaching impact and even shape the future. They can exist in any industry, and right now, a couple of significant megatrends in healthcare are likely to dramatically disrupt the status quo.

The great news for investors is that there are ways to profit from these megatrends. Two stocks that especially stand out are Intuitive Surgical (NASDAQ:ISRG) and Illumina (NASDAQ:ILMN). But what are the huge healthcare megatrends that will change the dynamics of the industry? And why are Intuitive and Illumina such fantastic stocks to buy to profit from these trends? 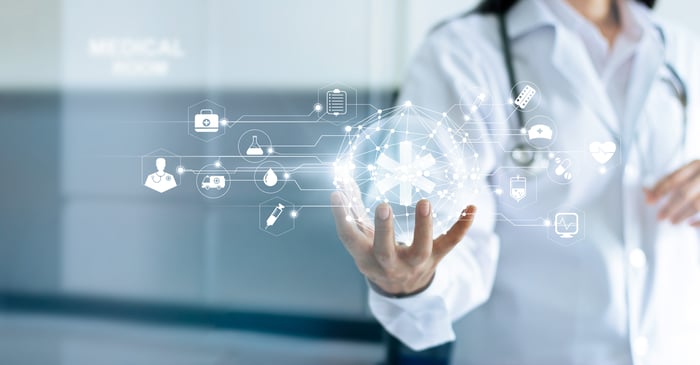 Healthcare megatrend No. 1: An aging population

Populations are also aging across the rest of the world. Within the next three decades, the number of senior adults in Asia and in South America will more than double. Europe's portion of individuals aged 65 and older will jump from 17.4% in 2015 to 27.6% in 2050.

Many changes are likely to result from aging populations. One of the most significant of these changes is an increased demand for healthcare products and services, notably including surgical procedures and prescription drugs.

Healthcare megatrend No. 2: The genomics revolution

Another important megatrend is what some refer to as "the genomics revolution." Although the capability to sequence DNA has been around since the 1970s, the time and costs involved with the process were so great that research remained relatively limited. The Human Genome Project, which sought to sequence an entire human genome, cost around $2.7 billion in 1991 dollars and took years to complete.

But things have changed tremendously since 2005 with the advent of next-generation sequencing (NGS), which drastically reduced the time and expense involved with mapping genomes. Costs have been driven down to around $1,000 to sequence a human genome.

These advances have opened up a world of opportunities. Countries such as the United Kingdom and the U.S. are undertaking major efforts to sequence hundreds of thousands of individual genomes. Drugmakers are developing personalized medicine based on the specific genetic characteristics of patients. Research is also underway to create a simple blood test that could be used to detect multiple types of cancer at very early stages, potentially leading to a paradigm shift in how cancer is treated.

As you might imagine, there are plenty of companies scrambling to capitalize on these two healthcare megatrends. But Intuitive Surgical and Illumina stand head and shoulders above the crowd.

Intuitive Surgical pioneered the use of robotic surgery with its da Vinci system, which enables a surgeon to use a control center several feet away from a patient to guide a robotic surgical arm to perform minimally invasive surgical procedures.

Cameras on the surgical arm give the surgeon a crisp, clear, and magnified view of the area that's the target of the procedure. The controls for da Vinci allow the surgeon to guide the robotic arm and surgical instruments in a way that provides greater precision, increased range of motion, and better access.

Intuitive Surgical benefits from the long-term trend of aging demographics because older individuals on average require more surgical procedures. In particular, two of the most frequently performed procedures using the da Vinci system are prostatectomies and colorectal procedures. The average age of diagnosis for prostate cancer is 66, according to the American Cancer Society. The average age for the diagnosis of colon cancer is 68 for men and 72 for women.

Likewise, Illumina is poised to profit tremendously from the genomics revolution. The company essentially spearheaded the revolution, introducing DNA sequencing systems that reduced costs and opened up sequencing to many more researchers. More than 90% of sequencing data in the world is generated using Illumina's systems.

Perhaps the best reason to like Illumina is that it isn't finished expanding the addressable market for genomic sequencing. The company expects that its NovaSeq system, launched in 2017, will eventually lead to the cost of sequencing a genome dropping to around $100. Within the next 10 years, Illumina could even become a household name as DNA sequencing grows routine for most individuals in developed nations.

What about potential rivals? Both Intuitive Surgical and Illumina could see increased competition. However, both companies enjoy significant competitive advantages thanks to their large install bases, strong financial positions, and continual innovation.

These advantages were achieved by Intuitive and Illumina not because they followed trends but instead because they were trendsetters. And that's why, over the long run, these two stocks could be the best friends to investors who are wanting to profit from two of the biggest healthcare megatrends to emerge in decades.