The stock market has seen a lot of volatility lately. After years of moving nearly straight up without a pause, major benchmarks like the Dow Jones Industrial Average are beginning to experience big swings in both directions on an almost daily basis. For those who've only started investing within the past 10 years, the idea of a major market downturn is a largely foreign concept, and that's making it difficult for many investors to stick with a particular point of view about the stock market.

The American Association of Individual Investors does a weekly survey in which it asks its individual investor members a simple question: Do you think the stock market will move up, down, or stay where it is over the next six months? Historically, the results have served as a reasonably good contrary indicator, with high levels of optimism often being followed by market downturns, while excessive pessimism has often preceded strong recoveries.

However, what's unusual is the extent to which sentiment has whipsawed in recent weeks: 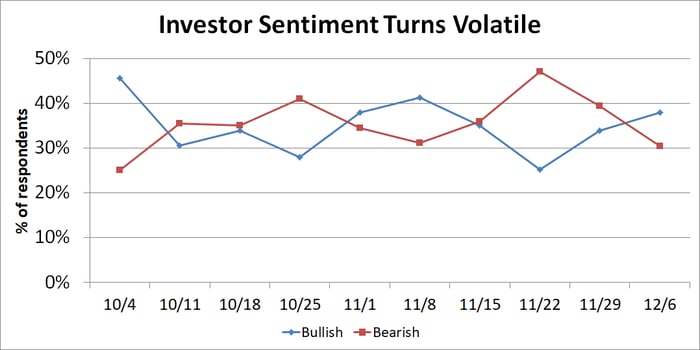 As you can see, bullish sentiment prevailed in early October, leading by a 46% to 25% margin over bearish investors. The subsequent October drop in the stock market crushed that optimism, pushing bearish sentiment above 40% and bullish sentiment below 30%. Continued large swings resulted from the market's response to the midterm elections, and the on-again, off-again nature of trade negotiations between the U.S. and China has also played a role in market volatility. Most recently, bullish sentiment took over following the G-20 summit -- just before new trade tensions sent markets dropping again.

The extent to which sentiment has changed so quickly shows a lack of conviction among investors. Part of that has to do with the nature of the question, because six months is too short a time to count on the long-term health of the stock market asserting itself.

Yet the survey also suggests an element of impatience with market corrections. Investors get scared during big downturns, but they very quickly return to a more optimistic stance at even a hint of a recovery. Real economic challenges take time to resolve, and that means that longer-term investors have to be more patient and let situations play out. That's not always easy, but the results for those who've stuck with the market over the long run have been quite rewarding.