Shares of self-storage real estate investment trust (REIT) CubeSmart (NYSE:CUBE) may finish well in the black this year after rallying in the weeks following the company's third-quarter 2018 earnings report. Since the late-October release, stock in CubeSmart is now up 10% year to date.

However, the self-storage industry is prone to cyclical behavior. Looking ahead to next year, will industry supply dynamics cut into CubeSmart's healthy metrics? 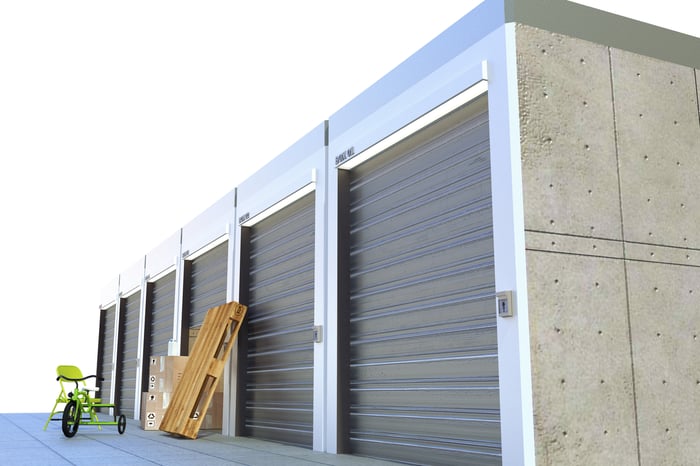 A projected peak in current supply

During CubeSmart's third-quarter earnings conference call, management shared some analysis from proprietary data on self-storage activity in the company's 12 largest metropolitan statistical areas. This data indicates that the supply in the current development cycle may peak at some point over the next year.

Peaking supply suggests that development projects may slow, as the storage market absorbs excess capacity, and developers either find it harder to finance projects or turn to other types of real estate development.

CubeSmart's business model won't necessarily suffer from a slowing of development in the current cycle, however. The company has a relatively modest development pipeline at present. CubeSmart anticipates purchasing one property under construction from a developer upon completion in the fourth quarter of 2018, at a total cost of $19.2 million.

In addition, the REIT has six joint venture development projects in the construction stage in the northeast. These buildings will be purchased from developers upon completion during 2019 for an aggregate price of $160 million. For context, CubeSmart's total property base (net of accumulated depreciation) is currently $3.5 billion.

Another factor insulating CubeSmart from the effects of peak supply is its preference for investing in mature markets with high storage demand. In faster-growth cities with younger populations, supply is often created at a faster pace than demand, and, as CEO Christopher Marr observed on the company's third-quarter conference call, such cities rely on population growth to eventually meet supply. CubeSmart's long-term focus on the boroughs of New York City provides an example of its investment in mature, high-demand storage markets that are less prone to rapid supply growth.

Investors who intend on holding CubeSmart for an extended period should note that its growing property management businesses adds earnings diversity and should assist in smoothing revenue regardless of unit development cycles. Increasing third-party management opportunities is one of the four core elements of the CubeSmart's business strategy (the others are maximizing cash flow from stores, acquiring stores in targeted markets, and disposing of stores with unattractive risk-adjusted returns).

The third-party management business is CubeSmart's fastest-growing revenue stream. At the end of 2017, CubeSmart reported 452 third-party stores under management. The company has increased that number by 28% to 582 in the first three quarters of 2018, with 60 stores added in the third quarter of 2018 alone. In the first nine months of 2018, revenue from third-party management fees jumped nearly 43% against the prior-year period to $14.8 million. While this makes up just 4% of total revenue, its growth rate suggests a quick rise to meaningful top-line contribution in the coming years.

One additional point is worth considering as investors piece together the industry picture and await CubeSmart's fourth-quarter results, which will include 2019 financial projections. As new supply growth slows, current market leaders like CubeSmart may enjoy higher NOI, as downward pressure on rental rates from an influx of new units dissipates. This should enhance CubeSmart's already healthy growth in realized annual rent per occupied square foot, which has expanded by 3.5% in the first nine months of 2018 against the prior-year period.