There was a time when Sirius XM Holdings (NASDAQ:SIRI) was on the brink of bankruptcy. The stock was trading for as little as $0.05 in early 2009, months after slow-moving antitrust regulators cleared the pairing of Sirius and XM. The satellite radio monopoly was losing money, and more than a few bears took jabs at the company. They called satellite radio a transitory technology, but here we are nearly a decade later and Sirius XM is still going strong.

The biggest fear through the first couple of years after Sirius XM hit rock bottom was that streaming apps would spell the end of satellite radio. Connected cars that allow smartphone apps to stream seamlessly through Bluetooth connectivity would be the end of premium-priced satellite-beamed platforms. Sirius XM is still growing, but now there's a legitimate threat in the premium app realm with Spotify Technology (NYSE:SPOT) pumping up the volume. It's a musical battle of the brands. Which is the better buy now? 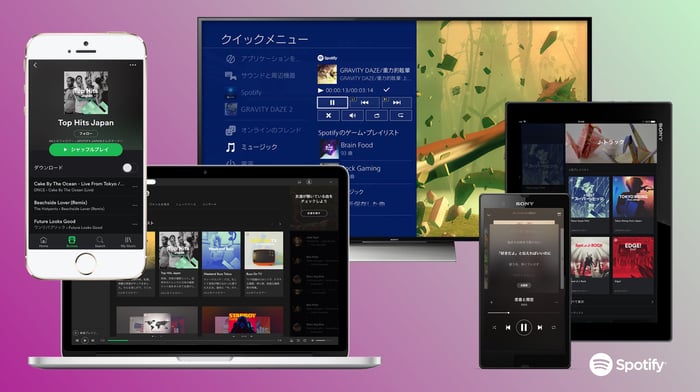 Cranking things up a notch

Sirius XM and Spotify are both cashing in on folks clamoring for high-quality audio streams, but the companies are leagues apart in fundamentals. Sirius XM is slow-growing but very profitable. Spotify is building up its audience at a heady clip, but it's a couple of years away from pulling out of the red on the bottom line.

The latest quarter for each company is a good way to size up where they stand now. Sirius XM's revenue rose a modest 6% in the third quarter. Its self-pay subscriber count is now up to 28.5 million, with total accounts clocking in north of 33 million. Sirius XM's profitability is growing even faster, up 24% in its latest quarter. Sirius XM's model is as scalable as it gets with its low variable overhead. It passes on the escalating music royalties it has to shell out to its subscribers. Adjusted EBITDA just topped 40% for the first time, and it's on track to deliver roughly $1.5 billion in free cash flow this year.

Spotify is at a different stage in its growth cycle. Revenue soared 31% in its latest quarter. There are now 87 million premium subscribers worldwide for the global platform, and there's a slightly larger audience of ad-tolerating freeloaders, as monthly active users clock in at 191 million. A one-time tax benefit pushed its bottom line into the black, but it's a facade. Analysts don't see Spotify's organic business turning a profit until 2020 at the earliest.

It's not just the top and bottom lines that are worlds apart here. Sirius XM's average revenue per user has historically inched higher. Sirius XM has been successful in pushing additional services to its slow-growing audience, and its ability to monetize its ad-backed talk channels continues to improve. Average revenue per user at Spotify is actually going the other way as it pushes discounted family and student plans and penetrates less affluent international markets. Sirius XM also has a knack of boosting its guidance with every passing quarter, and Spotify disappointed investors last time out by lowering the high end of its premium subscriber target for the end of this year from 96 million to 97 million accounts.

The better buy nod has to go to Sirius XM. As great as Spotify may be globally, it recently lost its lead in the U.S. market. Sirius XM is a proven portfolio winner, working on its 10th year in a row of an increasing stock price. Spotify is currently trading below its April IPO reference price of $132, and it's hovering near its all-time lows. Both stocks have their strengths, but if you had to buy into one to beat the other as we head into 2019, it's hard not to go with Sirius XM Holdings.