A few years ago, in an article about "smart beta" strategies, I mentioned the iShares Edge MSCI Min Vol USA ETF (NYSEMKT:USMV) as a potentially lower-risk alternative to exchange-traded funds that closely mirror the S&P 500 index.

Given the volatile market action in the second half of 2018, now seems like an appropriate time to revisit USMV. The ETF seeks to reproduce the movement of the MSCI USA Minimum Volatility (USD) index, which is constructed to:

... measure the performance of large and mid-capitalization equity securities listed on stock exchanges in the U.S. that, in the aggregate, have lower volatility relative to the broader U.S. equity market. 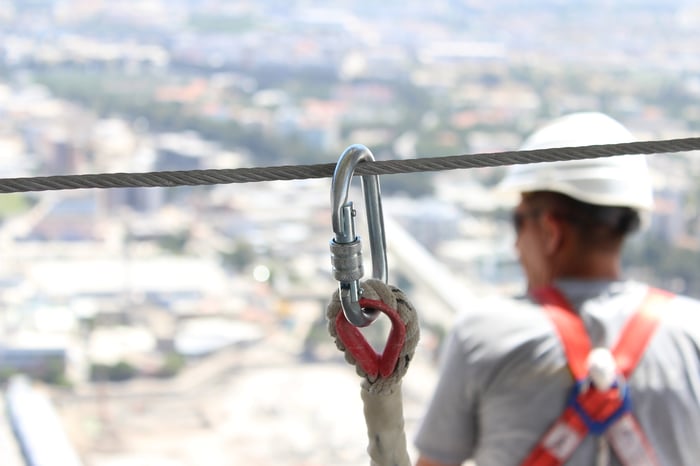 While the fund acts as a rough proxy to the U.S. equities market, as represented by the S&P 500 index, it differs subtly from widely followed, S&P 500-tracking ETFs like the SPDR S&P 500 ETF (NYSEMKT:SPY) or the Vanguard S&P 500 ETF (NYSEMKT:VOO). First, in order to produce an aggregate volatility lower than the broader market, the USMV index (and by extension the USMV ETF) must focus on individual securities with relatively low beta coefficients. True to its advertising, the USMV ETF's current beta of 0.67 means the fund is only two-thirds as volatile as the broader market.

But to outperform the S&P 500 index while maintaining lower volatility, the USMV index attempts to optimize its sector allocation. For context, the following image illustrates the relative proportion of industry sectors within the S&P 500 index: 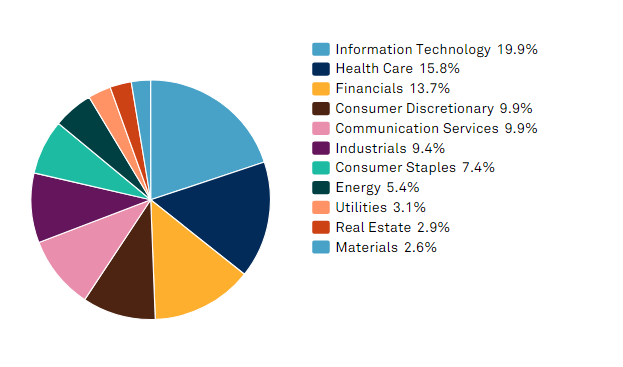 This pie chart is fairly representative of the U.S. economy; a highly developed, consumption-based economy that relies on advances in technology for a significant portion of gross domestic product (GDP) growth. Three thematic sectors -- information technology, healthcare, and financials -- represent just under 50% of the entire industry allocation S&P 500 index. The USMV index also differs in its approach to individual component weighting. As a capitalization-weighted index, the S&P 500 index has a tendency toward concentrations in its biggest constituents. Together, just three stocks comprise more than 10% of the index: Microsoft (approx. 3.7% of the index), Apple (approx. 3.5%), and Amazon (approx. 3%). The top 10 holdings in the S&P 500 index account for more than 21% of total holdings.

In contrast, the USMV index tends to cap its largest position at between 1.5% and 1.6% of total constituents in any given quarter. Thus it may miss some upside capture when Microsoft, Apple, and Amazon are surging in tandem, conversely, it enjoys built-in downside insulation. The top 10 holdings of USMV ETF, which closely track the USMV index's constituents, make up just under 15% of the fund's total equity investments:

Investors should note a few other basic facts about the fund. While not an indexing behemoth like the SPY or VOO ETFs, USMV can boast of being fairly substantial, with $19.3 billion in net assets. It's also an efficient investment vehicle, carrying an annual expense ratio of 0.15%. USMV's trailing-12-month price-to-earnings ratio of 23 is in line with the S&P 500's aggregate P/E ratio of 22. As for shareholder income, the fund's current distributions yield 1.8% annually.

Over the last five years, USMV has enjoyed wider separation from the broader market index, returning nearly 60% cumulatively against the S&P's 49% climb. When considering reinvested dividends, USMV also shines over the trailing-5-year period: 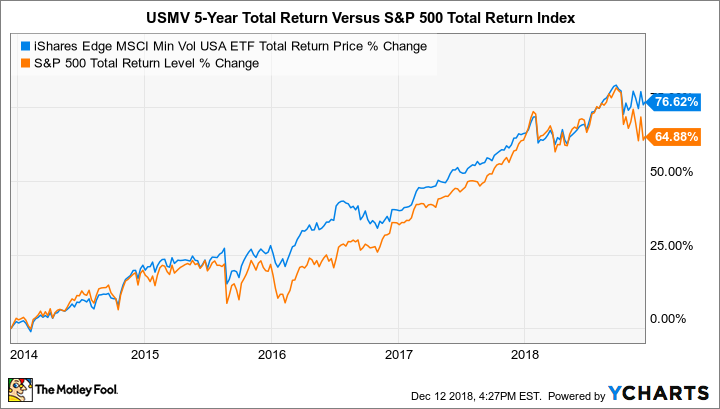 So, in the final analysis, can USMV reduce your risk in the market? The answer is: It likely can. Reduced volatility doesn't ensure reduced risk. However, given its sector approach and constituent weightings, the fund seems to me to be better equipped to handle systemic risk (i.e., the risk that a single company, industry, or sector may encounter an adverse event) than ETFs that replicate the S&P 500 index. 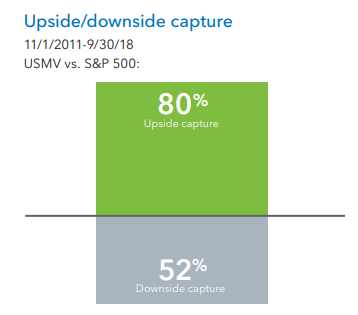 USMV's preference for slower growth but stable sectors additionally gives it an edge in handling systematic risk, also known as market risk -- the risk that an adverse event will affect the entire stock market.

Recent performance bears this out. According to the fund, its correlation with the S&P 500 is currently 83%, meaning that directionally, it moves in step with the S&P index roughly 83% of the time. From the first full month after its inception through the end of September 2018, the USMV ETF has captured roughly 80% of the S&P's upside, but just 52% of its downside movement. In other words, at least in the past, USMV has delivered a superior return with less downside risk -- an attractive trait for those looking to stabilize shaken portfolios.