Please ensure Javascript is enabled for purposes of website accessibility
Free Article Join Over 1 Million Premium Members And Get More In-Depth Stock Guidance and Research
By Rich Duprey - Dec 14, 2018 at 8:18AM

The addition of Apple Music to Echo devices eliminates another reason audiophiles would pay more for a Sonos smart speaker.

In the battle for smart-speaker supremacy, Amazon.com ( AMZN 1.42% ) continues to chip away at the advantages held by premium player Sonos ( SONO 2.45% ). Earlier this year, it debuted new device offerings to upgrade the Echo's audio quality. Now, it has sealed a deal that -- as of Dec. 17 -- will make Apple ( AAPL 2.79% ) Music's 50 million-song library, its stations, and its live-streams, available via Echo devices.

The choice of aspirational audiophiles

Previously, Sonos had been the only third-party smart speaker through which subscribers could connect with Apple Music -- though, of course, music lovers could access the massive catalog via their Apple HomePods.

So, while speakers from other companies work with a variety of music streaming services, including Amazon Music, Spotify, Pandora, iHeartRadio, Sirius XM, and TuneIn, you might have chosen a Sonos device because of its relatively exclusive access to Apple Music's extensive library. 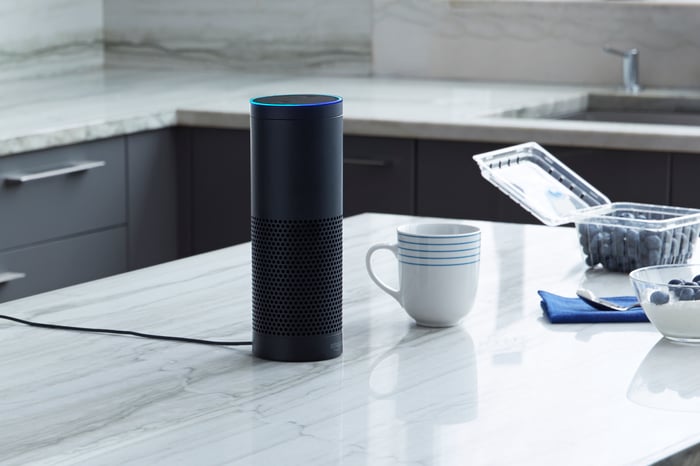 Now you can tune in to 50 million songs through Apple Music on your Echo device. Image source: Amazon.com.

Sonos also offers compatibility with Amazon's Alexa; support for AirPlay2 to stream content from any iOS and macOS device; and it works with any smartphone. In all, the sound quality and all Sonos offers adds up to a rich experience, and one that gave the speaker maker a competitive edge.

However, in September, Amazon entered the speaker component market with new devices that will give Sonos a run for its money. The Echo Sub,  Echo Link, and Echo Link Amp vastly improved the quality of the audio experience that an Amazon speaker can deliver.

Meanwhile, Sonos is trying to step on Amazon's toes by introducing the $199 Sonos One to take advantage of the mass market. Sonos isn't going to flood the market with cheap devices the way Amazon and Alphabet's Google have, but it is trying to be competitive while still differentiating itself from Apple's more expensive HomePod.

Sonos still has a few advantages

The recent arrival of the Amazon Echo Link Amp, which at $299 can lift the listening experience to virtually the same level as a $600 Sonos Amp, was a threat to Sonos, but the Apple Music deal may be the biggest challenge it faces.

However, Sonos still has a few differentiators. Right now, Echo devices don't support AirPlay2, and there's no Echo soundbar yet, -- and the Sonos Playbar is compatible with Alexa. But the AirPlay2 firewall might be the next to fall, and there's nothing stopping Amazon from developing its own Echo soundbar, or forging a deal with a partner. Amazon has been methodically eliminating the reasons why consumers might be willing to pay more for a Sonos device, and there's no reason to expect it will stop now that it has brought Apple Music into its ecosystem.