Aside from oil price volatility, one of the biggest storylines in the oil patch this year has been the amount of money oil companies have returned to their investors through dividends and share buybacks. What started as a trickle in 2017 has turned into a gusher this year as more companies ratcheted up the amount of money they sent back to shareholders. The latest one comes from Pioneer Natural Resources (NYSE:PXD), which is planning to repurchase $2 billion of its stock.

Pioneer Natural Resources joined the initial wave of oil companies enhancing their capital return plans earlier in the year when it authorized a $100 million share repurchase program and a 300% dividend increase. Even with the massive payout boost, though, Pioneer's dividend yield is still less than 0.25%. Meanwhile, that buyback only intended to offset the dilution associated with the company's annual employee stock awards. 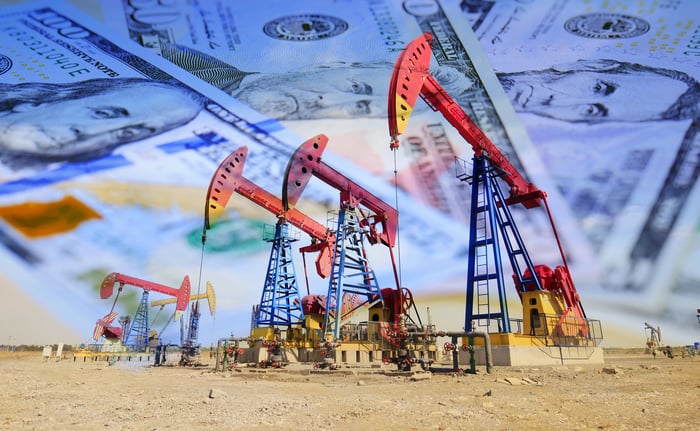 However, Pioneer's management team stated on the third-quarter conference call that they planned to "take steps to more meaningfully return capital to shareholders in the next few months," according to comments by CEO Tim Dove. The company is doing just that with its new $2 billion share repurchase program, which replaces the $100 million plan it unveiled earlier in the year. Given the current share price, it could retire about 8% of its outstanding shares.

Pioneer Natural Resources can easily afford this repurchase program considering that it ended the third quarter with $1.7 billion of cash on its balance sheet against just $2.3 billion in debt, which gave it the lowest leverage ratio in its peer group. In the meantime, the company recently agreed to sell its South Texas Sinor Nest oil assets for $132 million and its oil-field service business to ProPetro for $400 million, including $110 million in cash and 16.6 million shares of ProPetro, which it can eventually sell to fund the buyback if necessary. Pioneer also expects to sell its remaining Eagle Ford shale assets in the coming months. Finally, the company anticipates that it will generate free cash flow in 2019 even after funding a growth-focused capital program.

Gobbling up their stock as fast as they can

Pioneer's needle-moving share repurchase program is one of many in the oil patch these days designed to significantly shrink share counts and grow shareholder value. Devon Energy (NYSE:DVN) is currently undertaking one of the biggest buyback programs in the sector. While its $4 billion authorization isn't the highest amount, it is enough money to retire a remarkable 20% of Devon's outstanding stock. The company has been buying back its shares as fast as it can, which puts it on pace to complete its program early next year. With Devon on track to pull in as much as $3 billion of additional excess cash by 2020, it could buy back even more stock in the future.

ConocoPhillips (NYSE:COP), for its part, bought back $3 billion of its shares last year and is on track to retire another $3 billion in 2018. The company aims to buy back another $9 billion in stock in the coming years, or about $15 billion overall. That's enough money to retire roughly 20% of ConocoPhillips' outstanding shares from its starting point in 2016, though it's stretching out its buyback out over a longer time frame than Devon, so it might not retire as much stock if shares rise in the meantime.

Some extra fuel to drive shares higher in the future

While Pioneer's current buyback isn't as much as the industry leaders, the company is planning to retire a significant amount of its stock. That should reward its investors over the long term, especially as it continues growing production and cash flow, which would give it the funds to return even more money to investors through a more meaningful dividend and additional share repurchases. That makes it a compelling oil stock to consider for the long term.