Despite a strong start to the year, Apple (NASDAQ:AAPL) is ending 2018 on something of a sour note. The company hit a $1 trillion market cap in August, becoming the first U.S. company in history to achieve that benchmark. However, since hitting an all-time high in early October, shares of the iPhone maker have lost more than 25% of their value, due to fears of slowing iPhone sales and a possible trade war with China.

While these issues may be worth watching, one longtime bull thinks shareholders are missing the big picture. He believes that Apple is taking a breather before a massive run that could see the stock more than double from its current price over the next three years. Let's look at his thesis to see if it holds water. 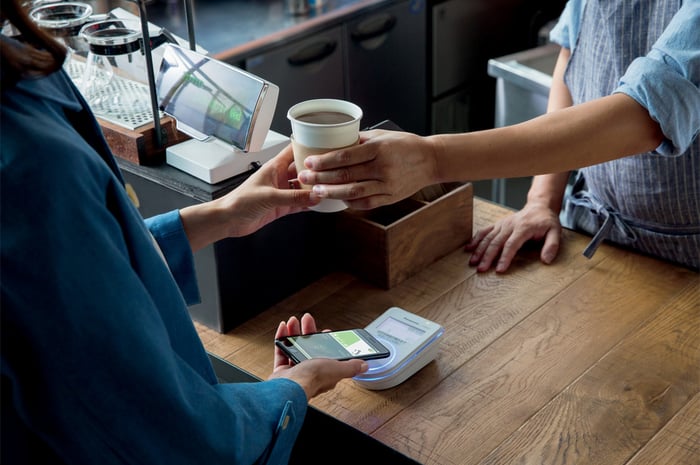 Gene Munster should be no stranger to longtime Apple investors, having covered the company since 2004. As a research analyst for investment bank Piper Jaffray, Munster wrote hundreds of opinions on the company, becoming one of the best-known Wall Street analysts in the process. Munster left Wall Street to launch research and venture capital firm Loup Ventures, and has continued to cover Apple since striking out on his own.

This gives Munster a certain amount of credibility concerning the Cupertino company, and he has a bold prediction. As investors fully grasp Apple's shift from being a hardware-centric company to being a services-focused one, Munster believes that Apple stock will reach $350 -- more than double its Friday closing price of $165.48 -- thereby adding nearly $1 trillion in market cap from its current level.

In an interview on CNBC, Munster said investors need to "look through some of the noise" that has surrounded Apple recently. An overview of recent events will help put that statement into context.

During the conference call to discuss its fiscal fourth quarter results, Apple revealed that, beginning with the December quarter, it will no longer provide unit sales data for its products: a closely watched metric among Apple followers. At the time, Apple CFO Luca Maestri explained that "the number of units sold in any 90-day period is not necessarily representative of the underlying strength of our business. Furthermore, a unit of sale is less relevant for us today than it was in the past given the breadth of our portfolio ... " Maestri went on to point out that Apple's top competitors don't provide unit sales data either.

Apple's business is one that investors don't "need to sweat every quarter," according to Munster.

Legendary investor Warren Buffett shares a similar view. In an interview earlier this year, the Oracle of Omaha said of investing in Apple:

Nobody buys a farm based on whether they think it's going to rain next year or not. They buy it because they think it's a good investment over 10 or 20 years. ... The idea of spending loads of time trying to guess how many iPhone X ... are going to be sold in a given three-month period ... to me, it totally misses the point.

Munster also points out that investors are placing too much emphasis on the recent change, while they should instead focus on Apple's transition to being a services-centric company. One important metric bears that out. While Apple has enviable hardware margins of about 30%, the margins for services are much more lucrative, "close to 70% gross margins," according to Munster. A closer look at the trajectory of services

In early 2017, Apple CEO Tim Cook raised eyebrows when he announced an ambitious plan to double the company's fiscal 2016 services revenue by 2020. The segment includes a host of businesses, including AppleCare, the App Store, Apple Music, iCloud, and Apple Pay.

Maestri reiterated Apple's plan on the recent conference call, saying, "[W]e are well on our way to achieve our goal to double our fiscal 2016 services revenue by 2020." He also pointed out that the company had over 330 million paid subscriptions in Apple's ecosystem, up 50% year over year, and 30,000 third-party subscription apps available on the App Store. These factors contributed to the "best quarter ever" for services, with revenue topping $10 billion for the first time, led by "new records for many, many services categories."

Munster pointed out that 18% of global smartphone owners "are committed to Apple" products, and he doesn't see that changing. This should provide a significant pool of growth for the company's services. He also cited Apple's iPhone Upgrade Program -- which allows customers to upgrade to the latest iPhone every year for a monthly fee -- as another catalyst.

"'I understand that that may be hard for some people to believe,' Munster conceded, 'but, ultimately, I think that that's the trajectory that this company is on.'"

Investors can always benefit from taking a longer-term view, and the upward trajectory of Apple's services business is undeniable. The combination of a growing services segment and more robust margins could certainly pave the way for a much higher share price. Will that result in another $1 trillion in market cap? Only time will tell.