Buy the big momentum or buy the big pullback? That's one question you might ask when it comes to deciding between Cronos Group (NASDAQ:CRON) and Scotts Miracle-Gro (NYSE:SMG). Shares of Cronos are up more than 45% so far in 2018, while Scotts stock has plunged around 40% year to date.

Another question you might ask is whether to invest in a pure-play marijuana stock (Cronos) or a top supplier to marijuana growers with extensive operations in addition to its cannabis focus (Scotts). But the best way to determine which of these two marijuana stocks is the better pick is to look at their future prospects. Here's how Cronos Group and Scotts Miracle-Gro compare. 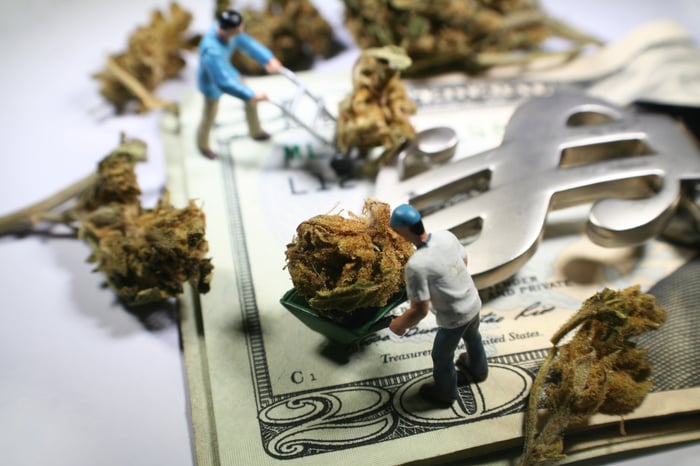 Cronos Group's prospects should be very good over the long run. The Canadian recreational marijuana market is just getting started. The country's total cannabis market should grow to around $5.5 billion by 2022, according to projections from Arcview Market Research and BDS Analytics.

European opportunities for Cronos look even more promising. The company already has a supply deal in Germany, which is likely to be the fastest-growing marijuana market in the world over the next four years. Cronos also has a supply agreement in Poland.

And there are even more international growth drivers for Cronos Group. The marijuana producer has joint ventures in Australia, Israel, and Latin America.

The key thing for investors to know about Cronos Group, though, is that it arguably ranks in the top two Canadian marijuana producers best-positioned to expand internationally. That's because Cronos recently announced the second-largest investment from a major company outside of the cannabis industry. Earlier this month, tobacco giant Altria (NYSE:MO) picked Cronos Group as its cannabis partner, buying 45% of the company for around $1.8 billion.

This deal gives Cronos Group a nice amount of cash to use in increasing its global footprint, something the company's CEO, Mike Gorenstein, said that it's eager to do. Cronos also now has a big partner at its side with a lot of expertise in successfully launching products in highly regulated markets across the world.

There's another opportunity for Cronos Group that could pay off in a big way if all goes well. Cronos teamed up with Ginkgo Bioworks in an effort to produce high-purity cannabinoids from genetically engineered strains of yeast. The potential exists to dramatically lower the costs associated with current methods of producing cannabinoids by extraction from cannabis plants.

What about Scotts Miracle-Gro's prospects? Back in the gold rush days, it was said that the biggest winners weren't the miners, but were instead those who supplied picks and shovels to the gold miners. With the green rush of cannabis under way, Scotts definitely fits into the "pick-and-shovel" category.

A few years ago, Scotts Miracle-Gro made a calculated decision to become a big player in the U.S. cannabis industry. Its Hawthorne Gardening subsidiary went on a shopping spree with a string of acquisitions. Now, Hawthorne is the largest supplier of hydroponics solutions to U.S. marijuana growers. The company also supplies products including fertilizers, lighting systems, irrigation systems, and ventilation systems.

The largest market for Hawthorne right now is California. Although California's recreational market got off to a rocky start in 2018, the size of the market should more than double to $7.7 billion by 2022. But there are even greater opportunities for Scotts beyond California.

Thirty-one U.S. states have legalized medical marijuana, with 10 now allowing the legalized use of recreational marijuana. Scotts is especially excited about the latter group.

More large states, including Illinois, New Jersey, and New York, could also legalize recreational marijuana in the not-too-distant future. These states combined could give Scotts new markets that together are roughly the size of the California market.

I think that both Cronos Group and Scotts Miracle-Gro will be winners over the long term. But which is the better marijuana stock? It depends.

Conservative investors are probably better off picking Scotts Miracle-Gro. The company is profitable. Its dividend is attractive. Scotts provides a way to profit from the booming cannabis industry while offering more financial stability.

Aggressive investors, though, might like Cronos Group better. Thanks to the Altria deal, Cronos appears to be in an excellent position to capitalize on growth in the global cannabis market. There could be plenty of volatility, but I view Cronos Group more favorably than I have in the past.

And for what it's worth, Cronos holds the distinction of being the best-performing marijuana stock of all time. That's not a bad credential to have.