One of the rationales behind Netflix's (NASDAQ:NFLX) decision to release three original movies exclusively into theaters before making them available on its streaming service was to be able to attract top talent, both onscreen and in the director's chair, by opening up the films for Oscar contention.

Having beaten HBO at Emmys with a long line of winning content, and given Amazon.com's recognition by the Academy Awards last year for two movies, attracting top-tier talent is becoming a priority to ensure Netflix's original programming remains a draw for its subscribers. And it seems to be paying off.

Netflix just signed a multiyear deal with director Chris Columbus to get a first look at any feature-length movie he and his 1492 Pictures partners want to produce. 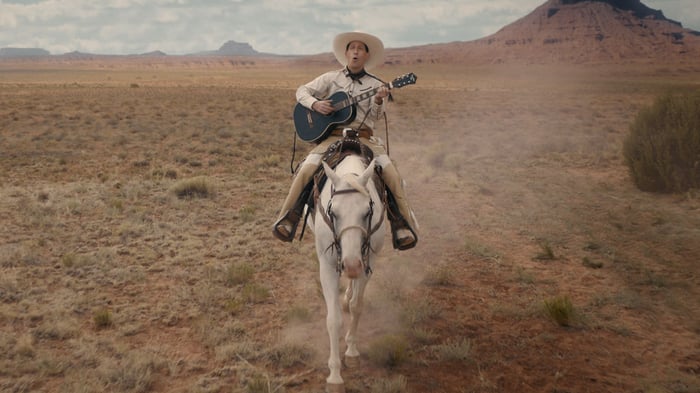 Netflix's The Ballad of Buster Scruggs was directed by the Coen brothers. Image source: Netflix.

Preparing for the exodus

Columbus is an Academy Award-nominated director, with films including Harry Potter and the Sorcerer's Stone, Harry Potter and the Chamber of Secrets, and Home Alone to his credit. In conjunction with his 1492 Pictures partners, Columbus also produced the just-released The Christmas Chronicles, which began airing on Netflix at the beginning of the month.

Original programming is an increasingly critical component of Netflix's future, and as it faces the prospect of content providers pulling their programming from the service, it will only become more important.

Disney (NYSE:DIS) previously announced that it would take most of its content off Netflix when its current contract expires next year, as it's launching its own competing "Disney+" service. When the media giant closes on its Fox acquisition, it will also control a 60% ownership stake in streaming competitor Hulu.

Becoming the place for movies

Netflix says it has considered the potential for partners to pull content and has planned for it, which is undoubtedly part of its original programming initiative that accounts for a large portion of the $13 billion the company is expected to spend on content acquisition this year.

That figure will need to grow substantially in the coming years to replenish the company's library and make Netflix a first-option destination for Hollywood. Of the current theatrical releases, Netflix's Roma looks on target to receive the most Oscar attention, but its other feature efforts also brim with bona fides: The Ballad of Buster Scruggs was directed by the Coen brothers, and Bird Box features Sandra Bullock.

Now Netflix is getting first dibs on movies Chris Columbus and his partners want to make over the next few years. While Disney, Time Warner, and Comcast already have extensive libraries of content available to them to kick off their streaming services, Netflix must re-up its film catalog, and deals such as this one indicate its movie strategy is already paying dividends.