Leo Sun, Dan Caplinger, and Matthew DiLallo
(TMFSunLion)
Author Bio
Leo is a tech and consumer goods specialist who has covered the crossroads of Wall Street and Silicon Valley since 2012. His wheelhouse includes cloud, IoT, analytics, telecom, and gaming related businesses. Follow him on Twitter for more updates!

Many dividend stocks tumbled over the past year, since conservative investors often shift from high-yielding stocks to bonds when interest rates rise. However, during the recent market downturn, some solid dividend stocks now pay yields over 4% while trading at low valuations. 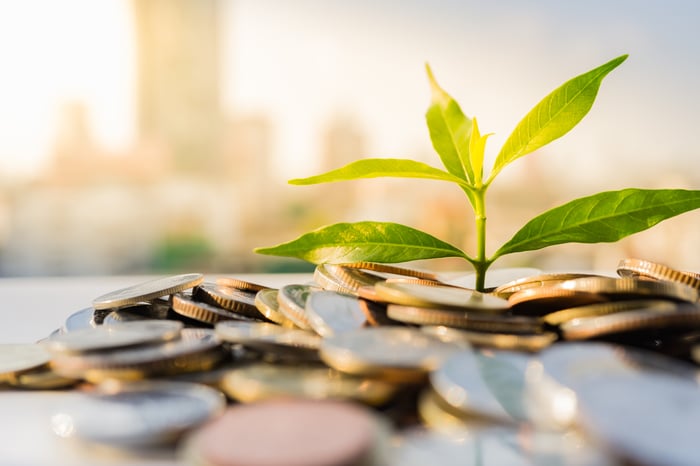 Macy's accomplished this by closing its weaker stores, selling and leasing back its real estate, opening more Backstage off-price stores and Bluemercury beauty product stores, and expanding its mobile ecosystem and loyalty program. It's also shrinking down its underperforming stores and launching new neighborhood stores to increase its sales per square foot. The death of Sears could also drive more traffic to its stores.

Macy's expects its revenue to rise less than 1% this year. However, its earnings -- boosted by expanding gross and operating margins -- are predicted to jump 9% to 14%. This indicates that the company isn't using markdowns to drive sales growth. It also forecasts mobile sales to hit $1 billion, or about 4% of its estimated revenue, this year.

The stock has fallen about 20% over the past six months, but that decline reduced its forward P/E to 8 and boosted the forward yield to 4.9%. Macy's has raised that dividend annually for seven straight years, and spent just 27% of its earnings and 43% of its free cash flow on that payout over the past 12 months, giving it plenty of room for future hikes. That low valuation and high yield should set a floor under Macy's stock and reward patient investors.

Dan Caplinger (Altria Group): Altria Group has been a longtime favorite of dividend stock investors, with yields that have often far outpaced what you can get from the market overall. The tobacco giant's current yield of almost 6% is nearly triple what the S&P 500 pays, but it's not even all that out of the ordinary for Altria over the long run. Investors have routinely discounted Altria's survival instincts as it finds ways to keep growing even as interest in cigarette smoking gradually declines over time.

Altria has looked for multiple ways to diversify its business, even in the face of tough regulatory conditions. The company maintains a 10% stake in beer giant Anheuser-Busch InBev, and it recently bought a sizable stake in Canadian cannabis producer Cronos Group (NASDAQ:CRON). On top of that, Altria has been looking to make a partnership with e-cigarette specialist Juul Labs while at the same time having decided mostly to abandon its own in-house e-cigarette opportunities in favor of pursuing the IQOS heated-tobacco system that it collaborates on with Philip Morris International.

Investors need to appreciate the risks involved in Altria's business model, especially as regulators look to clamp down on both traditional and electronic cigarettes. But with so many irons in the fire, Altria should be able to find a way to move forward no matter what obstacles it finds in its path.

Matt DiLallo (Williams Companies): Natural gas pipeline giant Williams Companies offers investors the best of both worlds as it pays a high-yielding dividend, which it expects to grow at a healthy rate in the coming years. Currently, Williams' dividend yields an attractive 5.5%. The company made several moves over the past year to shore up the foundation of that payout and improve its long-term sustainability. These actions have included selling assets exposed to commodity price volatility and replacing them with ones that generate stable fee-based cash flow. As a result, Williams now gets 97% of its cash flow from predictable fees. Furthermore, the company's balance sheet has improved significantly while its dividend coverage ratio is now up to a healthy 1.6 times.

By firming up its financial foundation, Williams now has more flexibility to invest in expanding its pipeline network. The company currently has more than $5 billion of growth projects under construction, which should give it the cash flow to grow its dividend another 10% to 15% in 2019. Meanwhile, it has enough additional projects in development that should support 5% to 7% annual earnings growth beyond 2019, which should allow the company to increase its dividend by that same rate.

Williams' strategic initiatives over the past few years have positioned the company to not only pay an above-average dividend but grow that payout on a consistent basis going forward. That makes it a great option for income-seeking investors to consider.