The stock market has been extremely volatile lately, with the Dow Jones Industrial Average routinely seeing triple-digit daily moves in both directions. Investors have concerns in multiple areas, including trade tensions between the U.S. and key trading partners like China and general worries that the nearly 10-year-old bull market might well have run its course.

One particular concern that market participants have involves the state of the U.S. economy. Although economic growth has been strong in recent years, the Federal Reserve and its monetary policy moves have made many investors nervous. On three separate occasions so far in 2018, the Fed has boosted short-term interest rates by a quarter percentage point. In their explanations for the increases, Fed officials have stressed the need to keep future inflation in check and to prevent economic growth from overheating. 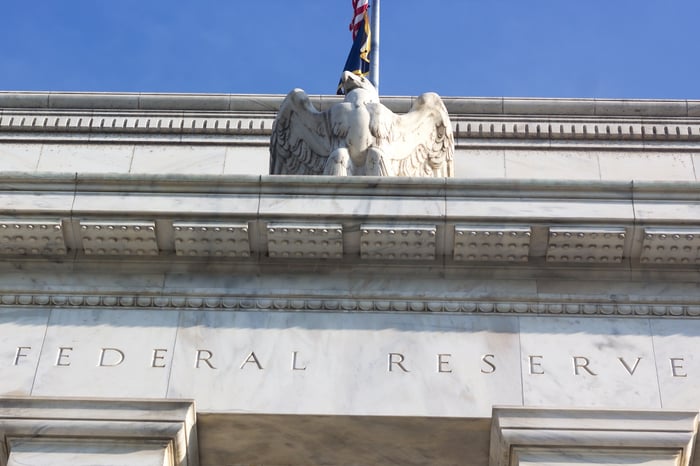 The Fed's moves have had an impact on the bond market, sending rates higher on Treasury securities, bank CDs, and other fixed-income investments. Yet although short-term rates have risen dramatically, the long-term rates over which the Fed typically has only an indirect influence haven't gone up as much. That's resulted in what's known as a partially inverted yield curve, in which the usual relationship of longer maturity investments having higher yields no longer holds true. As the chart below shows, so far there's only an inversion over a very small part of the yield curve from three years to five years, with other areas showing a normal upward slope. 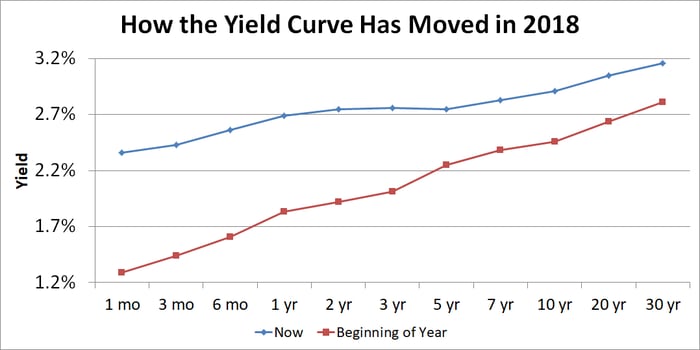 Investors worry about inverted yield curves because they often come immediately before an economic recession. That's because when economic growth is likely to be lower than normal, investors typically buy longer-term Treasury securities in order to lock in a better return than they'll get from economically sensitive investments like many stocks. That in turn forces the government to boost interest rates on shorter-term Treasury securities in order to draw investor demand.

Yet most recessions are short enough that they don't need to have an impact on your long-term investing strategy. Even if your stock portfolio takes a temporary hit, history has shown that stocks bounce back from recessionary environments, often quite quickly. From an investing standpoint, only those who have relatively short time horizons should be nervous about the inverted yield curve and a potential recession -- and short-term investors should already have taken steps to shift from stocks to alternatives more suited for immediate cash needs anyway.