However, what's even more important to investors is whether a company can sustain its payout over the long term. That's where Chevron shines. Its dividend appears poised to continue growing in the future, while Kinder Morgan Canada's might soon come to an end. That's one of many reasons Chevron is a better buy right now. 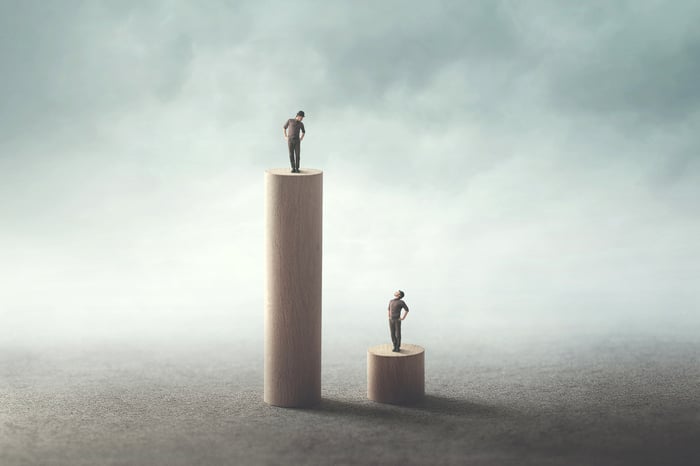 The bull and bear cases for Chevron

Chevron has a long history of not only paying a generous dividend but increasing it on an annual basis. With its raise last January, the oil giant has now boosted its dividend for 31 consecutive years. That trend appears set to continue considering that Chevron's top priority is to maintain and grow its dividend in the years ahead.

The oil giant currently produces more than enough cash to do just that. Through the third quarter of this year, it had generated $21.5 billion in cash, which was more than enough to cover its $6.3 billion dividend outlay. That left it with plenty of money to fund capital projects totaling $14.3 billion through the third quarter, as well as repurchase stock and pay down debt.

One of the potential risks with an oil company like Chevron is that its cash flow will ebb and flow with oil prices, hindering its ability to pay its dividend if oil crashes. However, the company can produce enough cash on $50 oil to cover both its current payout and capital budget. Meanwhile, it has a strong balance sheet backed by $9.7 billion in cash at the end of the third quarter, and sports one of the highest credit ratings in the oil patch, which gives it a nice cushion. All told, Chevron has the financial strength to maintain its dividend in good times and bad.

The bull and bear cases for Kinder Morgan Canada

However, because of the sale of that controversial pipeline and its associated expansion to the Government of Canada earlier this year, Kinder Morgan Canada's future is unclear. While the stable cash flow generated by the company's remaining assets can easily support its new dividend level, it could cease to exist in the next year because Kinder Morgan is exploring its options for that entity. The company could sell or merge Kinder Morgan Canada with a third party, take it private, or use it to make acquisitions in Canada. In light of that uncertainty, it's not an ideal stock to buy and hold for the dividend, as the payout could soon disappear.

Chevron is the clear choice

Chevron is a behemoth in the energy sector, which means it's not going anywhere. Investors can expect the company to continue increasing its dividend each year since its cash-rich balance sheet and low-cost operations provide a nice cushion against lower oil prices. Kinder Morgan Canada, on the other hand, is a small midstream company that might not remain public much longer. Therefore, Chevron is the easy choice for income seekers since it's much more likely to continue sending them more cash in the coming years than Kinder Morgan Canada.