Shares of Spectrum Pharmaceuticals (NASDAQ:SPPI), a biopharmaceutical company focused on oncology treatments, are sliding after the Food and Drug Administration refused to designate the company's lung cancer candidate a Breakthrough Therapy. Disappointed investors have hammered the stock 38% lower as of 3:23 p.m. EST on Thursday.

Spectrum Pharmaceuticals had already told investors that it submitted a Breakthrough Therapy designation request for poziotinib, so the company couldn't keep the FDA's unusual decision to decline that request a secret. The company's been exciting investors with the hope of accelerated approval for poziotinib as a treatment for relapsed non-small cell lung cancer (NSCLC) patients with a specific mutation, but if it can't earn a simple breakthrough designation, that probably won't happen. 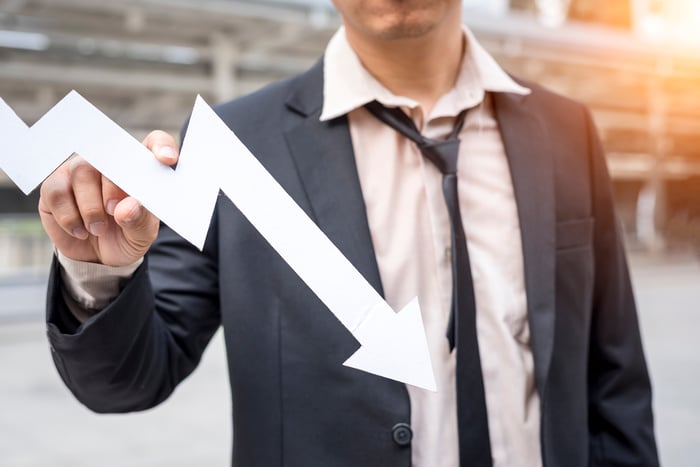 The news is especially upsetting because sales for Spectrum's commercial-stage drugs are dismal. The company's best-selling treatment, Folotyn, racked up just $11.3 million during the third quarter. Sales of all six of Spectrum's marketed treatments slid backward during the three months ended September, which pushed up the company's operating loss to $29 million from just $15 million a year earlier. Investors were counting on poziotinib to quickly step in and stop the bleeding.

Although Spectrum intends to keep trying with its single-arm study, investors aren't buying it. Earning a breakthrough designation usually isn't hard: You simply need to show signs that your drug can outperform available options. Spectrum reported an impressive 40% response rate among 30 lung cancer patients who had relapsed multiple times, which should be enough for the designation. With this in mind, investors are worried this program is more troublesome than it appears.

We'll find out more about poziotinib when the Zenith20 study reads out in the second half of 2019. The single-arm study is evaluating 300 patients with NSCLC, and Spectrum intends to submit an application supported by just 87 patients in a group with EGFR exon 20 mutations. Whether the FDA will accept it for review is still anybody's guess.

Editor's note: A previous version of this article referenced a pre-BLA meeting with the FDA for poziotinib; that meeting was in regard to Spectrum's drug Rolontis instead.  The Fool regrets the error.