The year 2018 hasn't been great for First Majestic Silver (NYSE:AG), with the stock losing nearly 19% year to date. To be sure, silver markets have been depressed and silver prices under considerable pressure in recent months, but First Majestic has other concerns to deal with.

Ironically, its biggest concern is related to its recent acquisition, which has not only added an agreement with the world's largest precious metals streaming company, Wheaton Precious Metals (NYSE: WPM), but also given the miner its cornerstone asset.

Should you bet on the acquisition and buy First Majestic shares going into 2019, or stay on the sidelines? I'll present a case for both sides and tell you why you would eventually want to invest in the stock today to gain leverage on silver prices.

In May 2018, First Majestic acquired Primero Mining for roughly $320 million in an all-stock deal, issuing shares to Primero and Wheaton Precious Metals. For First Majestic, it seems like a small price to pay for the kind of asset it has bagged: the San Dimas mine in Mexico. 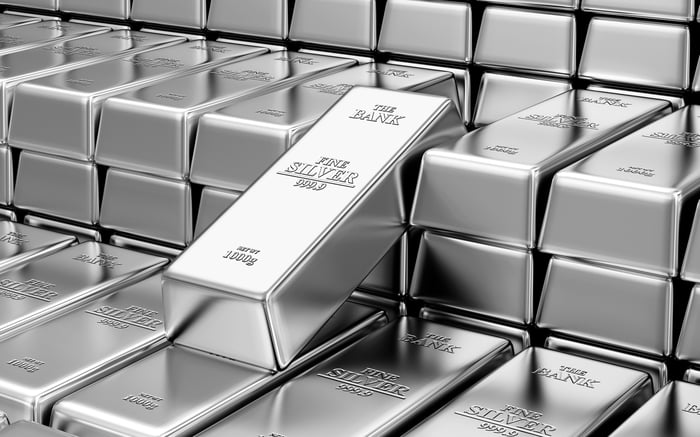 San Dimas is a major gold and silver mine that has been operating for over 100 years. It was among the world's largest silver mines until about a couple of years ago -- before technical issues, labor unrest, and a financial crunch hit operations.

With an annual production capacity of 5.8 million to 6.4 million ounces of silver, San Dimas is now the largest producing mine for First Majestic and should boost the company's silver production substantially. 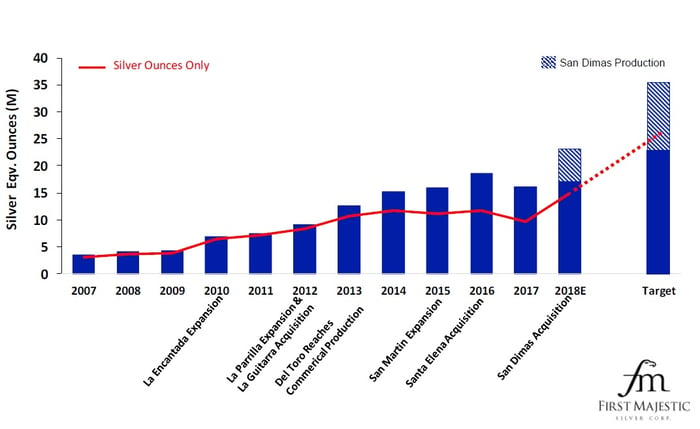 Even better, San Dimas is also the lowest-cost mine for First Majestic. For fiscal 2018, San Dimas' all-in sustaining cost (AISC) is expected to be only around $6.99 to $8.19 per ounce of silver. That looks significant when you realize that -- except for Santa Elena's expected midpoint AISC of $7.70 per ounce this year -- each of First Majestic's remaining five mines is operating at substantially higher, double-digit costs. In Q3, First Majestic's AISC declined 8% year over year to $15.12 per ounce of silver thanks entirely to San Dimas.

In short, San Dimas should not only drive First Majestic's production higher but also bring down its costs substantially, provided the mine can operate without hiccups (more on that later). That should also position the company better against cost-efficient competitors like Pan American Silver (NASDAQ:PAAS).

Then there's the streaming agreement with Wheaton Precious Metals that should add further value to First Majestic's business.

Wheaton Precious Metals is a streaming and royalty company, which means it strikes deals with mining companies to purchase metals for discounted prices and provides funding to the miners in return. One of the company's oldest such agreements was with Primero on San Dimas, which has now been replaced with a new one with First Majestic.

Under the deal, Wheaton is entitled to buy 25% of the gold equivalent ounce produced from San Dimas (which is primarily a gold mine with silver as a by-product) at $600 per ounce with a 1% annual inflation adjustment or at the spot gold price, whichever is lower. First Majestic estimates that's a "60% reduction in value" versus the previous Primero stream, hinting that it negotiated a favorable deal. In return, First Majestic issued shares to Wheaton, and the latter now effectively owns an 11% stake in the silver miner.

The cash flows from this streaming agreement will serve a key purpose: ramping up San Dimas to full capacity. First Majestic has already identified key investment areas for the next 12 to 18 months and says the acquisition should help it become the world's largest primary silver producer.

Primero's acquisition, in fact, was a strategic move to deepen First Majestic's footprint in Mexico, essentially making it a "one country" company. And that hasn't gone down well with some investors.

First Majestic's acquisition in Mexico comes at a time when the mining industry in the nation is shrouded by clouds of uncertainty. In late November, Mexico's new Congress initiated bills calling for a revision of the country's mining code that includes greater power to indigenous communities and potential revocation of permits for mines with a negative social impact, among other things.

There is a silver lining, though. First Majestic believes its strong relationship with Mexico's national union of mining workers should help end labor issues even as the company is trying to resolve long-pending tax disputes related to Primero's streaming agreement with Wheaton.

While reliance on one nation is a risky proposition for any mining company, San Dimas also positions First Majestic for strong growth. I believe investors might want to give management a chance, as I see greater upside than downside in First Majestic shares -- assuming it integrates Primero's operations smoothly and can handle any hiccups in Mexico.