Please ensure Javascript is enabled for purposes of website accessibility
Log In Help Join The Motley Fool
Free Article Join Over 1 Million Premium Members And Get More In-Depth Stock Guidance and Research
By Adam Levine-Weinberg - Updated Dec 20, 2018 at 10:51AM

The top department store operator has returned to consistent sales growth by making major investments in some of its most promising stores.

It has been an up-and-down year for Macy's (M -4.14%) in 2018. Shares of the department store giant plunged to a multiyear low in late 2017, but rallied in the last two months of the year. That rally continued into 2018, as Macy's stock surged from around $25 at the beginning of the year to a peak of more than $40 this summer.

Since then, the stock has come back to earth, slumping all the way back to the low-$30 range. That has left Macy's shares trading for less than nine times earnings, despite rapid improvement in the company's balance sheet. 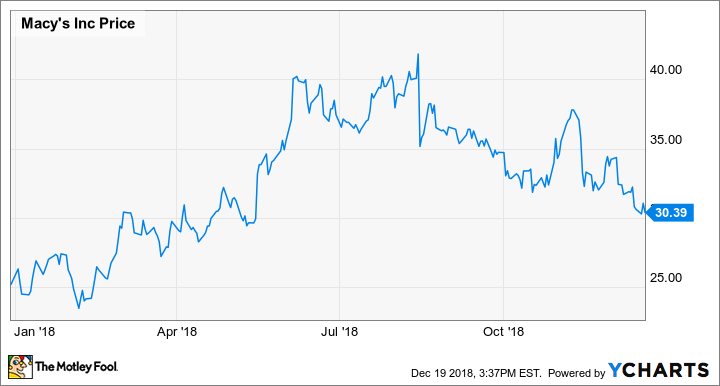 In short, investors are treating Macy's like it won't be able to sustain its current level of earnings, let alone achieve any profit growth in the long run. Yet people may be underestimating Macy's prospects. For the first time in a long time, the company has a real growth strategy.

Macy's was floundering for years

Between 2015 and 2017, Macy's reported 11 consecutive quarterly comp sales declines, as the retailer struggled to cope with declining mall traffic and changing shopper habits. For most of that period, the company's turnaround efforts focused on cutting costs, closing underperforming stores (and stores located too close to one another), and monetizing valuable real estate.

Thus, in early 2016, Macy's announced a major organizational restructuring, with the goal of cutting annual operating expenses by $400 million. At the same time, the company announced that it would close 36 stores in early 2016.

The cost savings and store closures weren't enough to offset worsening retail sales trends. In August 2016, Macy's revealed plans to close another 100 of its roughly 675 full-line stores over the next few years -- but mainly in early 2017. About two-thirds of those stores closed last year, and another 11 closed in early 2018. Macy's has closed more than 100 stores since the beginning of 2016. Image source: Author.

In theory, store closures should have boosted Macy's comp sales by driving customers to the remaining stores. However, it wasn't until a year ago that the company finally found its footing, posting a 1.4% comp sales gain for the fourth quarter of fiscal 2017.

Macy's has a plan to keep growing

This turnaround late last year allowed Macy's to enter 2018 with some momentum. On the Q4 earnings call in February, CEO Jeff Gennette announced a plan to make big investments in 50 stores -- known as the Growth50 -- to drive faster sales growth.

Some of the changes included new lighting and improved fixtures, upgraded technology, a greater focus on "big-ticket" items through new or enlarged furniture and mattress showrooms, and the introduction of food and beverage offerings (such as Starbucks cafes) inside the stores. Certain Growth50 locations also received Macy's Backstage outlet stores.

By midyear, with many of the key improvements still to come, the Growth50 stores had already seen a meaningful lift in their sales trends and customer satisfaction scores. Results continued to improve in the third quarter, particularly after Macy's completed renovation work in those stores.

As a result, Macy's plans to upgrade another 100 locations in 2019, using what it has learned from the Growth50 stores. Over the next several years, about half of the Macy's store fleet could potentially get these upgrades.

The upside is meaningful

The Growth50 initiative -- along with the expansion of the Macy's Backstage off-price chain and ongoing technology investments -- has helped Macy's substantially improve its sales performance this year. Through the first three quarters of fiscal 2018, comp sales rose 2.7% year over year, including a 3.3% increase last quarter.

With a full year of the benefits from investments made this year, plus an additional lift from the 100 stores set to be upgraded next year, comp sales growth should remain strong in fiscal 2019 -- even with tougher year-over-year comparisons. The recent demise of regional competitor Bon-Ton Stores should help, too.

Gennette wants Macy's to start regaining market share. The retailer's recent results suggest that this goal is not as outrageous as it may sound. With investors still treating Macy's like a business in terminal decline, this might be a great time to invest in the leading U.S. department store company.