Is there still life in Sears Holdings (NASDAQ:SHLDQ)? The bankrupt retailer recently reported third-quarter results showing something people haven't seen in a long time: an increase in comparable-store sales, which were up 4.3% from the year-ago period. You would have to go all the way back to the first quarter of 2010 to find another time that the retailer posted positive comps at both Sears and Kmart.

Unfortunately, this is more of a death rattle than a new spark of life. The comp sales surge was simply a result of Sears putting lots of merchandise on clearance. Customers were responding to extensive discounts and not a newfound desire to shop its stores. Once the liquidation sales are gone, the customers will be, too -- along with Sears, in all likelihood. 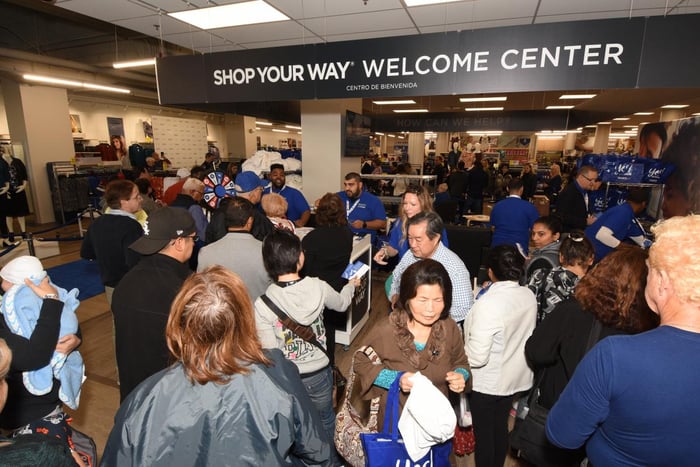 Sears said its return to comp sales growth was sparked by deep discounts on apparel, jewelry, footwear, and tools at stores it had marked for closure. It closed over 100 stores during the third quarter and will close another 241 this quarter.

Despite the retailer's unexpected return to comp sales growth last quarter, revenue fell 23% to $2.7 billion from $3.6 billion a year earlier. Almost 90% of the decline was due to having fewer stores open. Sears has closed more than 330 stores over the last 12 months. 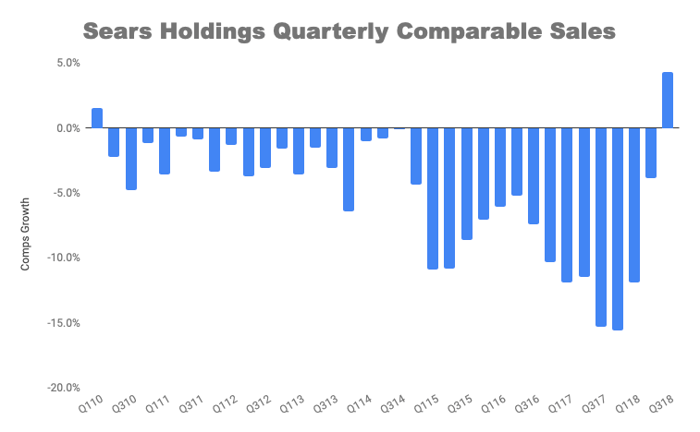 Indicative of the problems it still faces, Sears saw comp sales tumble in the appliances category and at its auto centers during the third quarter. Customers don't trust that Sears will be around much longer, so products and services that carry warranties aren't moving because people don't think the retailer will be able to make good on them.

Just as troubling is the fact that Sears' net loss widened in the quarter, nearly doubling to $950 million. On a year-to-date basis, its net loss has more than tripled, growing from $561 million for the first three quarters of fiscal 2017 to $1.9 billion for the same period this year.

Sears Holdings is currently in the midst of deciding whether to sell itself to chairman Eddie Lampert's ESL Investments hedge fund or to liquidate the entire business to satisfy creditors. The company's third quarter results call into question Lampert's attempt to rescue the retailer.

Although Lampert says he wants to save 50,000 jobs, Sears would probably just resume its downward spiral once he has control. Under the proposed sale, ESL would gain control of 500 stores and would be absolved of most debts and other liabilities previously associated with the company; the hedge fund would swap all of its loans to Sears Holdings for equity in the new business; and creditors would be precluded from suing Lampert or ESL Investments for any actions that brought the retailer to its current state.

However, other retailers and investors are eagerly eyeing Sears Holdings' real estate, and the board of directors is considering whether it could get more money by selling the company asset by asset rather than turning the entire thing over to Lampert.

It is possible that a smaller Sears could be profitable, and Lampert has said all along that he would like to get the company down to where it is operating only stores that make money. Other companies have been able to emerge from bankruptcy and continue operating, but they still possessed a storehouse of goodwill.

By contrast, Sears has sapped its goodwill with customers. There's not much going for the company right now. It took almost a decade for Sears to break its streak of comp sales declines, and then only because it was in the throes of a clearance sale. The only remaining question is whether Sears will be killed off now or buried later.