The turnaround at footwear retailer DSW (NYSE:DBI) is on solid ground, but given an added layer of uncertainty following the company's acquisition of brand design and manufacturing house Camuto Group, investors seem unsure of what to make of it.

After an initial run-up of 8% after the release of DSW's fiscal third-quarter 2018 earnings report on Dec. 11, shares fell again to trade about where they were beforehand, even though the shoe and sneaker seller raised guidance for the year. 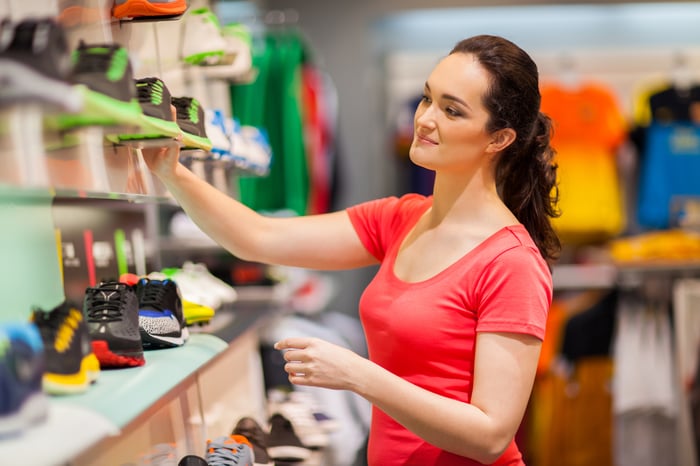 Running in the right direction

The earnings report ticked off all the right boxes to indicate DSW has moved beyond the morass it found itself in as recently as last year. Sales were up 17% year over year to $833 million in the quarter; comparable-store sales were 7.3% higher; and adjusted earnings of $0.70 per share surged 56%, handily beating analyst expectations by $0.18.

Yet CEO Roger Rawlins isn't content to just bring DSW back to where it was before it was swamped by retail bankruptcies and the launch of direct-to-consumer channels by suppliers which saturated the market. Saying "what got us here won't get us there," Rawlins indicated the business needed something to shake it up. Whether investors envisioned entering the shoe design and manufacturing business isn't as certain.

The acquisition of the Camuto Group will take DSW in a very different direction from the retail path it knows cold. The complexities of the new arrangement bring with them a heightened level of risk. Navigating a design shop, vendor, and a Chinese sourcing outfit all at once, while maintaining its retail operations, is a move out of DSW's circle of competence.

DSW doesn't have an especially good track record on acquisitions. It wrote off its purchase of online shoe-seller Ebuys and jettisoned the Town Shoes chain after acquiring the Canadian footwear retailer. The Camuto Group is a financially troubled business that DSW is now tasked with fixing, even as it learns a whole new part of the industry.

However, DSW has at least given itself a firm financial position to begin moving up the learning curve.

Off on the right foot

In the fiscal third quarter, DSW's U.S. retail business enjoyed a 10% year-over-year increase in sales to $722 million. Its primary women's footwear segment, which accounts for almost two-thirds of total net sales, saw sales jump 18%, and comps were up in the high single-digit range, the segment's fifth consecutive quarter of comps growth. Men's footwear held its own with a 15% increase in sales to account for 20% of the total. Total company comps have now increased for two straight quarters, meaning DSW is getting support for its retail efforts across the board.

Notably, the retailer also says its national rollout of DSW Kids drove its "most successful back-to-school season" in its history. Kids' footwear accounts for 10% of the U.S. footwear market, and the increased volumes DSW saw during the quarter have management convinced that it can substantially grow its share of the kids' market.

DSW's widespread improvements in its operations form the basis for increasing its fiscal 2018 guidance again, with adjusted earnings projections now calling for a range of $1.70 to $1.85 per share, up $0.10 from management's prior outlook. And the company now sees revenue expansion of 12% to 14% versus the previous range of 6% to 9%. DSW's comps growth outlook has also been upgraded to mid- to high-single-digit percentages from low- to mid-single-digit percentages.

The fact that DSW has rebounded so strongly, particularly as it heads into the holiday season, makes it so worrisome that it has shifted in this new direction with the Camuto Group. Management remains optimistic about what this new business brings to the table, but until DSW proves it can back up its words with deeds, the footwear retailer's stock will be weighed down by doubt.