Please ensure Javascript is enabled for purposes of website accessibility
Log In Help Join The Motley Fool
Free Article Join Over 1 Million Premium Members And Get More In-Depth Stock Guidance and Research
By Rich Duprey - Dec 24, 2018 at 10:04AM

As the brewer sells more non-beer beverages, the industry trade group moves the goalposts on what it means to be a craft brewer.

If you needed any further proof of the difficult straits in which the craft beer industry finds itself, look no further than the latest change to the Brewers Association's definition of craft beer. No longer must a brewery use the traditional ingredients that have laid at the heart of brewing for so long -- now it just needs to make beer in some quantity. Otherwise pretty much anything goes.

While the change reflects a desperate attempt by the craft beer industry's trade group to keep Boston Beer (SAM -2.14%) in the fold as the leading craft brewer's beer sales continue to tumble, when the definition no longer captures the essence of what brewing is about it's right to question why they bother having a definition at all. 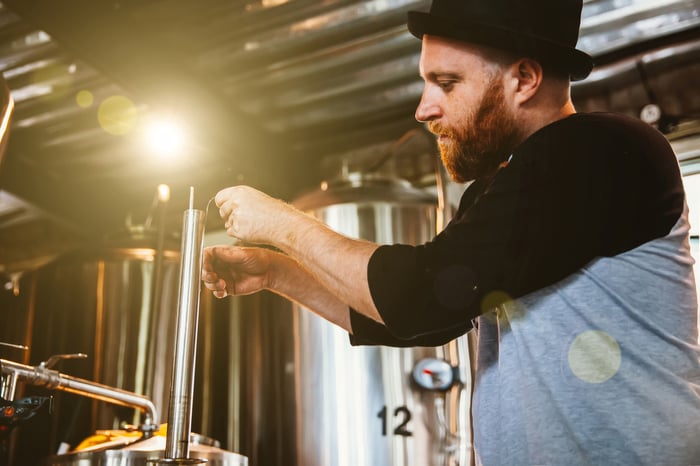 As goes Boston Beer, so goes the industry

This is the fourth iteration of the Brewers Association definition since 2007, and it may be the one that most degrades the purpose of having one in the first place. Removing the requirement that a brewer must use traditional ingredients, it recognizes Boston Beer is struggling to sell its Samuel Adams beer. While depletions of hard cider, tea, and seltzer are enjoying healthy growth, beer depletions continue to fall. ("Depletions" measures the rate at which beer, already held by a distributor, is shipped to retail customers; it's considered an industry proxy for consumer demand.)

Boston Beer's non-beer depletions surged 18% in the third quarter of 2018 and shipments soared 23.5% as sales of its Angry Orchard rose cider and berry-flavored Truly brand of seltzer continued to gain popularity. Samuel Adams beer, on the other hand, was down once again -- the fifteenth consecutive quarter its depletions have declined.

Boston Beer doesn't report depletions for each of its brands, so it's not certain its non-beer portfolio will surpass beer sales this year. But the Brewers Association is changing its definition before that happens to ensure Boston Beer can still be called a craft brewer because the company accounts for 8% of the total volume the trade group reports each year.

The Brewers Association maintains, "This move was not made because of Boston Beer, but the timing of evaluating and revising the definition is related to Boston Beer." It goes on to note Boston Beer is not alone and other brewers will face a similar challenge in the years ahead, so keeping what's arguably the most recognizable craft brewer within the fold lets it advocate more effectively on behalf of the industry.

The new definition maintains a brewer needs to be small, produce under 6 million barrels annually, and be independent, or not more than 25% owned by a non-craft brewer. (The production limit was raised from 4 million barrels in 2011, again to keep Boston Beer in the category.)

But instead of a mandate that traditional ingredients be used, the association opted to require breweries to simply have a brewer's notice from the Treasury Department's Tax & Trade Bureau that allows them to brew beer for sale, though it does stipulate that they actually have to brew beer.

The Brewers Association says some 60 brewers were kept out of the organization because they primarily made wine and mead, and now they can be included. Wineries and meaderies may not be top of mind for most people when they think of craft brewing. Yet beer drinkers are willing to recognize "mass craft" beer like Shock Top beer and Blue Moon, even though they're made by Anheuser-Busch InBev and Molson Coors, respectively, so there does appear to be room for an evolving definition.

For example, the trade group previously allowed the inclusion of adjuncts to let brewers like D.G. Yuengling & Son into the organization, since its use of corn and rice to brew beer didn't fit the prior definition. And currently, because of marijuana legalization, many brewers are experimenting with new ingredients such as THC and cannabidiol.

Ultimately, the Brewers Association's protestations notwithstanding, this change was primarily about Boston Beer and its inability to actually sell beer. That said, investors certainly don't care if the brewer is selling more cider and seltzer than beer as its stock is up 34% in 2018. So maybe this is an issue that only concerns purists, who will be left crying into their beers that what it means to be a craft brewer has been significantly watered down.