Please ensure Javascript is enabled for purposes of website accessibility
Log In Help Join The Motley Fool
Free Article Join Over 1 Million Premium Members And Get More In-Depth Stock Guidance and Research
By Daniel B. Kline - Updated Dec 24, 2018 at 2:16PM

You can do most of the same things no matter what your net worth is.

Affluent parents -- defined as households with investable assets of at least $500,000 -- generally understand the cost of raising a child and have planned for their child's future as well as their own retirement and legacy, according to a new study from Personal Capital. That's a wallet being pulled in a lot of directions, even for relatively wealthy families.

"Affluent parents are trying to best prepare for their children's futures by financing higher education, helping them get their first jobs and tackling important money conversations," said Personal Capital Vice President of Private Client Services Michelle Brownstein in a press release. "Fortunately, these individuals are starting to cut the purse strings on their adult children to prioritize their own retirement saving and spending." 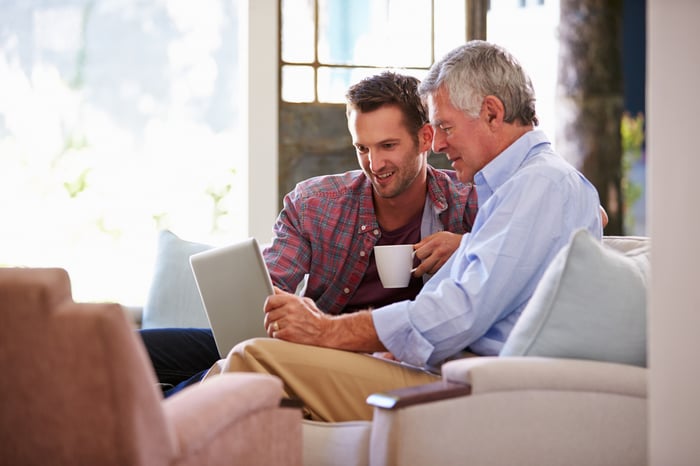 Parents have to teach their children how to handle money. Image source: Getty Images.

What are the priorities?

Affluent parents largely understand that education can help keep their kids doing as well as they have. Seven in 10 reported that they will pay for their child's college education, while only 36% said that they didn't spend, or don't plan to spend, anything on their child's K-12 years.

Half of affluent parents did say they have stopped, or plan to stop, supporting their child after college graduation. Another 39% expect to help their child land his or her first post-graduation job.

Taking care of everyone

Two-thirds of those surveyed said they will choose to "spend their money on themselves in retirement versus passing on an inheritance to their child." Despite that, only 19% of affluent parents said that they "do not expect to have to change their retirement plans in order to support their children."

"Affluent parents use varying financial products to make their money work for them and to create a financial legacy for their children," according to the Personal Capital report. "Three in four (74%) are invested in the stock market."

"While Affluent Americans are spreading their wealth across several different investment vehicles, they are not necessarily managing their cash properly," he said. "Every person, regardless of wealth, should have a savings account for emergencies, and ideally those should be high-yield savings accounts so investors can earn on the cash they're holding onto and achieve their long-term goals."

The kids of affluent parents have some inherent advantages. They may have access to better education, and it's easier to make money when your family already has money.

That doesn't mean the parents of more modest means can't give their kids a leg up. Teach your kids the value of money early on. Lead by example and show them how to budget, save, and invest for the long term. You don't have to be wealthy to share those lessons, and if you teach them, then your kids, no matter how much money you have, will have a better chance at success.