The media giant is making magic happen, and it still has a few tricks up its sleeve.

The power and pixie dust of Disney (DIS 2.90%) is everywhere these days. It's the company behind the three highest-grossing movies of the year. The family entertainment giant's theme parks continue to be the undisputed top draw in that industry. Even its media networks division -- the one segment that is routinely knocked for the cord-cutting revolution gnawing away at ESPN, Disney Channel, and ABC -- managed to return to top-line growth in fiscal 2018.

Disney is back. The stock even hit new highs on a dividend-adjusted basis last month, before buckling under with the rest of the market in the latest market sell-off. Disney is proving its worth as an investment, but is this king of all media ready to deliver big gains to shareholders in the future? Let's size up the iconic company's prospects in generating material wealth for investors in the future. 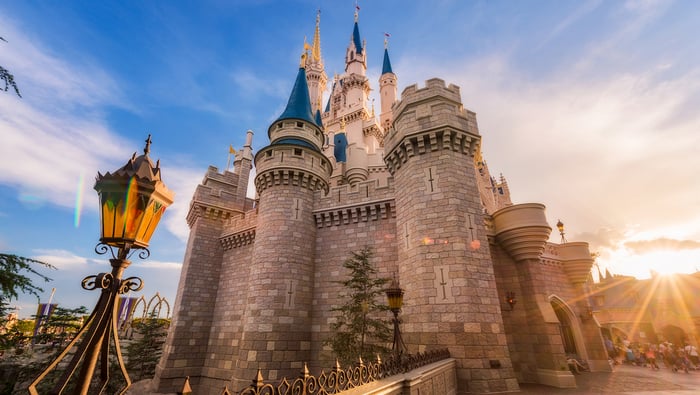 When you wish upon a stock

I've owned Disney since the 1980s, but it wasn't until a couple of years ago that I stocked up on more than just a few token shares. There's a lot to like in assessing Disney's appreciation potential, especially now that the stock has corrected sharply off last month's highs.

Disney's ecosystem has never been stronger. Disney's parks and studio entertainment segments -- two major divisions that now combine to account for more than half of the revenue mix -- are on fire. They both posted double-digit percentage gains on the top line in the recently concluded fiscal 2018, and both segments delivered even larger increases in operating income as margins expanded for the year.

The catalysts are in place for continued dominance on both fronts. Disney's theme parks are generating record attendance, and things will be kicking up a few notches in the next few years with major new attractions on the way across its gated tourist magnets. Disney's studio arm should continue to dominate the box office. It has had the highest-grossing film for four consecutive years, and the pipeline is loaded. The Star Wars cash flow won't end when the ninth and presumably final installment hits theaters in May. Several more franchise spinoffs and origin stories will follow, and there's a long runway with Marvel and Pixar films currently in the works. Disney also has a strong track record in updating its classic releases.

The skies may seem to be a bit cloudier when we address Disney's media networks segment, but it did manage to post top-line gains in fiscal 2018 in both its cable networks and broadcasting businesses. Let's also not underestimate the Disney-branded streaming service that will roll out within the next year. Disney is following cord-cutters to the new digital turf, and its content library is a thing of beauty.

The only segment to take a step back in fiscal 2018 was its consumer products division, but it's also the smallest of Disney's four operating segments. Back-to-back years with declining revenue in that segment isn't a good look, but it should prove temporary as Disney's pipeline of content intensifies in the coming years. It will close shortly on its $71 billion deal for Twenty-First Century Fox, which will make the industry's top franchise factory even stronger.

Disney shares are reasonably priced at this point. Even after Wednesday's monster rally, the stock finds itself fetching less than 15 times this new fiscal year's projected earnings. Disney's 1.8% yield is modest, but the House of Mouse has been routinely jacking up its payouts. The past is historic at Disney, but the future appears to be just as bright for the media mogul -- and, more importantly, its shareholders.