The story is all in the telling, so it depends on whom you ask.

Folks would be rightly confused in trying to understand whether or not retail was boom or bust over the past several weeks. Anyone who's been following the headlines will know that they have proclaimed both the worst or most wildly successful holiday season in years. In turns out that the reality is more complex and both may be true, depending on how you gauge success.

Let's dig into the details underlying these proclamations and see what's behind the seemingly contradictory assessments of the current retail situation. 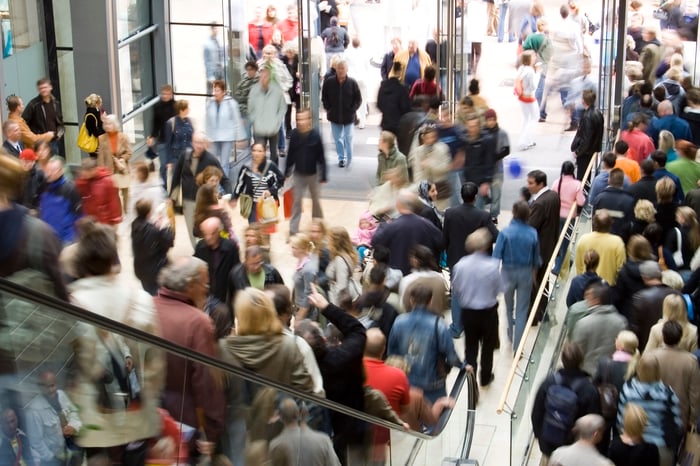 From the upbeat camp

For the period beginning Nov. 1 and ending Dec. 24, retail sales in the U.S. climbed to $850 billion, up 5.1% year over year, according to Mastercard SpendingPulse. The payments giant tracked both brick-and-mortar and e-commerce purchases across all payment methods to come to this conclusion. The research also showed that digital sales grew 19.1% compared to the same period last year. If those numbers hold once the final tally is in, it would make 2018 the best holiday shopping season in six years.

This puts holiday retail sales on track to soar past a forecast released earlier this year by The National Retail Federation (NRF), which predicted sales would increase by 4.3% to 4.8%, to a range of $717.45 billion to $720.89 billion. To put that into perspective, the NRF put the average annual increase at about 3.9% over the previous five years.

From the doom-and-gloom camp

The headlines that have been decrying that retail is on pace for its worst December ever are focused on stock prices rather than business performance. Most of the bellwether retailers have taken it on the chin during December's stock market drubbing. The broader market, as represented by the S&P 500 (^GSPC -2.42%), had fallen about 15% during the period from Dec. 1 through Christmas Eve, and retailers like Macy's (M -4.96%), Nordstrom (JWN -6.55%), Target (TGT -2.25%), and Kohl's (KSS -4.72%) have been beaten down as well. 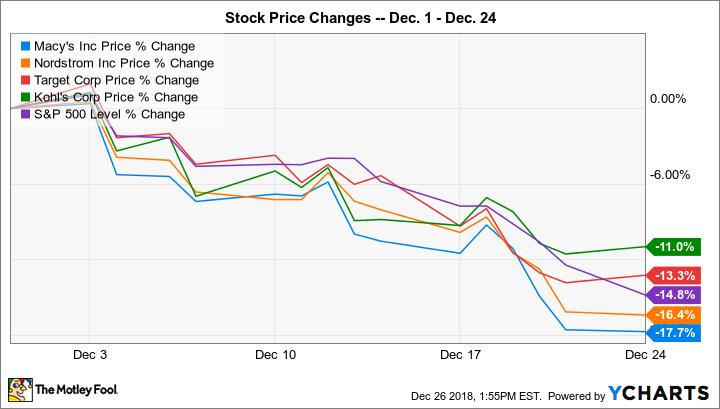 Erin Gibbs, an analyst for S&P Global Market Intelligence, said the losses were tied to the overall market decline. "We know that when markets are going down like this, correlations rise and everybody goes down. It doesn't matter how good your fundamentals look," she told CNBC.

When the entire market sells off, it can take a lot of strong performing companies with it. Gibbs added "earnings growth for retailers are almost about twice the rate of the S&P 500. This actually looks like a really good entry point, valuations look attractive, so I'd say use this as an opportunity."

During the lead-up to the holidays, retailers sought to capitalize on shoppers' enthusiasm in a variety of ways. Both Target and Macy's extended deadlines and expanded pickup and delivery options that enabled customers to get orders in time for Christmas Eve. Target said that customers could place orders up until 6 p.m. on Christmas Eve and pick them up that night before stores closed. Kohl's opened its fifth e-commerce fulfillment center in an effort to meet online shopping demand.

All these initiatives likely helped push the strong retail numbers backing the rosier headlines about the holiday quarter.

For long-term investors, it's much more important to focus on the business than the stock price, particularly when the rest of the market is swooning. If this is indeed the best retail holiday sales season in six years -- and early indications point to that being the case -- some of our favorite retailers will be reaping the bounty of this holiday season -- even if it takes some time for stock prices to catch up with reality.