Audio chip specialist Cirrus Logic (NASDAQ:CRUS) has been supplying audio chips to Apple (NASDAQ:AAPL) for years, a relationship that's proven quite lucrative for the former. According to Cirrus Logic's most recent annual filing, about 81% of the $1.53 billion in revenue that it generated in its fiscal 2018 came from sales of chips to Apple.

Although that relationship has clearly been good to Cirrus Logic and its shareholders over time, the company has been looking for new sources of growth by both broadening its customer base for its core mobile audio products as well as expanding its own product portfolio beyond mobile audio chips. 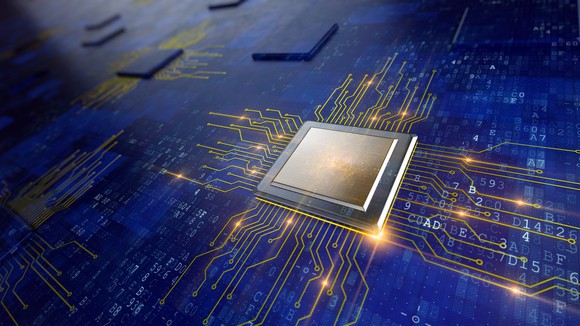 To that end, let's take a look at three significant growth opportunities for the company.

Going after the midrange

In Cirrus' most recent investor presentation, the company said that the opportunity in so-called "mid-tier" audio products (put another way, that's audio chips targeted at the midrange of the smartphone market) will grow from about $500 million in 2017 to about $900 million by 2021.

So, there are two things working in Cirrus' favor here. First, the company has an opportunity to grow its share in that segment, as the bulk of its revenue comes from sales of audio chips into what it calls the "flagship audio" segment -- unsurprising considering how much of Cirrus' revenue comes from sales to Apple. Second, the opportunity itself is becoming larger.

Now, the onus is on Cirrus to successfully capture that opportunity. Indeed, in the company's most recent shareholder letter, CEO Jason Rhode wrote that "We are particularly pleased with the developments in our boosted amplifier business as the company increased penetration of boosted amplifiers in flagship and mid-tier smartphones [...]."

For a while, Cirrus has been talking up its efforts in developing chips dedicated to handling voice biometrics. In the company's most recent shareholder letter, Rhode said the following:

...as the requirements for sophisticated digital assistants increase in applications such as smartphones, wearables and the smart home, OEMs are articulating a need for ultra-low power, low latency edge processing. Whether for security, privacy latency or efficiency reasons, the consumer experience is often improved by moving some of the key elements of processing to the local device.

The executive went on to explain that the company's "28-nanometer advanced voice biometrics solution is particularly well suited for those use cases." (Don't sweat the meaning of "28-nanometer" in this case -- this just refers to the manufacturing technology generation upon which the chip is built.)

Investors are going to need to be patient, however, as the payoff from the company's voice biometrics efforts won't be immediate. Indeed, Rhode explained that this technology is still "under development," but also said that "[we] remain actively engaged with several key customers and continue to optimize our solution to enhance environmental robustness, security and power consumption."

According to Cirrus' investor presentation, the opportunity for its voice biometrics chips will swell to $750 million by 2021, up from nothing in 2017.

Another opportunity that Cirrus highlighted in its investor presentation is "smart accessories audio."

According to the company, the size of that opportunity was $400 million in 2017 and is set to more than double to $900 million by 2021. Driving that growth, Cirrus claims, is "[demand] for digital headsets and adapters fueled by transition from analog to USB-C digital connectivity."

Perhaps the highest profile example of such smart accessories are Apple's AirPods, which are wireless earbuds that have proven to be nothing short of a massive success. Indeed, back in June of 2018, analyst Christopher Rolland with Susquehanna claimed that Cirrus would actually be supplying chips to perform noise-cancellation functionality in an upcoming update of Apple's AirPods.

To get a sense of why Cirrus' optimism around this segment isn't unrealistic, note that analyst Ming-Chi Kuo with TF International Securities recently predicted that sales of Apple's annual AirPods units would swell from between 26 million to 28 million in 2018 to an eye-popping 100 million to 110 million by 2021. To the extent that Cirrus -- Apple's go-to audio chip vendor -- can ride that wave, its revenues from this segment should surge.

It's not just Apple, either. We've seen other companies rush to imitate the AirPods. We've seen Huawei release its own FreeBuds, and Alphabet's (NASDAQ:GOOG) (NASDAQ:GOOGL) Google launch its own Pixel Buds. Those accessories aren't likely to be the smash hits that Apple's AirPods are, but the point is that the industry is following Apple's lead. And that, for a component vendor like Cirrus Logic, could be like selling shovels in a proverbial gold rush.