It's said that cheap stocks are cheap for a reason, and that's not a bad initial assumption to make. But a stock that is under $25 a share can present a great opportunity if the price is paired with a solid business opportunity. JD.com (NASDAQ:JD), Kinder Morgan (NYSE:KMI), and Dropbox (NASDAQ:DBX) are three top stocks under $25 that investors should consider. Read on to find out what these fool.com contributors have to say about these stocks. 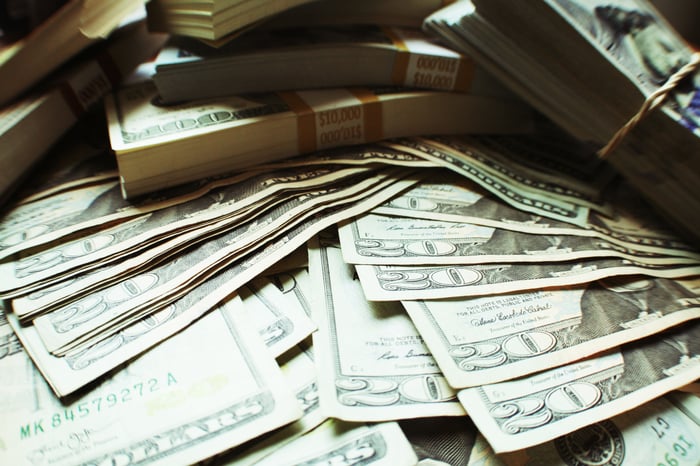 Highway to the boomtown

John Bromels (Kinder Morgan): The stock market hasn't been kind to natural gas pipeline operator Kinder Morgan over the last few years. In 2015, a sharp dividend cut caused the market to knock the company's per-share price from the low $40s all the way down to the low teens. Since then, it's never cracked $25 a share. Today it's trading at about $15 a share, despite a dividend hike and share buybacks. And despite the company's big opportunity in the Permian Basin.

Oil and gas drilling has skyrocketed in the Permian Basin of West Texas, so much so that there isn't enough pipeline capacity to ship all the oil and gas being produced there. But Kinder Morgan is on top of the problem, currently building the 430-mile Permian Highway Pipeline, a 42-inch (read: huge) pipeline that can transport 2 billion cubic feet of Permian natural gas per day. That pipeline is already almost fully subscribed, with users already signed up to use it when it's ready, even though it isn't expected to be operational until 2020.

Kinder Morgan is also working on a Gulf Coast Highway pipeline from the Permian Basin, which won't be operational until 2019, but is also already fully subscribed. When it's operational, it will also transport about 2 billion cubic feet of Permian natural gas per day. These big numbers are important, because most of Kinder's pipelines follow a "tollbooth" model: companies pay based on the amount of products they ship through the lines. By moving so much product and operating at full capacity, these projects will have a big impact on Kinder's bottom line.

Now's an excellent time to consider buying Kinder Morgan to capitalize on its future growth plans.

Fantastic growth at a deep discount 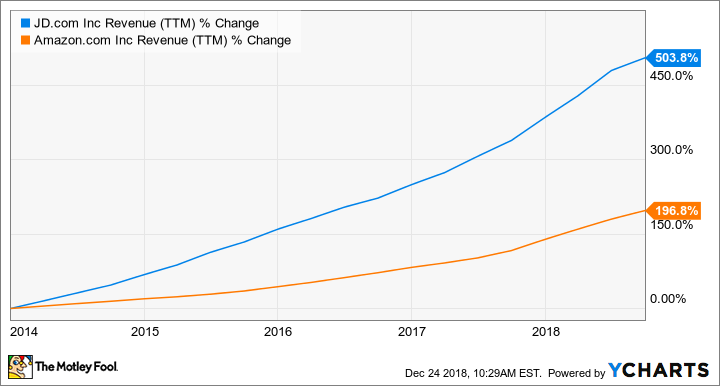 Yet, JD's share prices have been sliced in half in 2018. The plunge has little to do with JD's actual business -- the company has delivered a steady stream of strong revenues and mixed earnings. Instead, investors have been worrying about JD's ability to weather the ongoing trade tensions between Beijing and Washington while founder and CEO Richard Liu was facing the potential of being charged with rape. Liu denied wrongdoing and authorities in Minneapolis recently announced they had decided not to press charges.

Market makers are basically betting that JD absolutely needs Liu's expert hand on the reins in order to thrive, especially during times of geopolitical economic turmoil. That might have been true in the past, but Liu has grown his company to the point where a solid stable of lieutenants could keep the good times rolling without direct input from the founder's vision. The JD you see today could be run by a ham sandwich, as it were.

So this stock is on sale for all the wrong reasons. I think the market's concerns about JD are misplaced and the stock is poised for a tremendous bounce as the Minneapolis allegations fade into the past.

Rich Duprey (Dropbox): Cloud storage specialist Dropbox has dipped below its IPO offer price as concerns about global macroeconomic issues have caused the stock market to have its worst December ever. Tech stocks have generally been affected more because they have run higher than many other sectors, and Dropbox, which nearly doubled in value in the months after its IPO, has fallen by over 50% from those heights.

Yet as the foregoing makes clear, these are concerns that aren't endemic to Dropbox, whose business remains sturdy. It has over 500 million registered users and more than 12 million paying ones, and over time ought to be able to convert the majority of those registered users into paying ones.

In its third-quarter earnings report, Dropbox said revenues rose 26% for the period as the average revenue per paying user rose to $118.60 from $112.05 a year ago, and non-GAAP operating margins widened to 12.8% from 8.2%. Because it produces prodigious amounts of free cash flow, Dropbox doesn't need to raise cash from outside sources and can finance its growth internally.

The stock may be down at the moment, but its current price makes Dropbox an attractive investment.