Please ensure Javascript is enabled for purposes of website accessibility
Free Article Join Over 1 Million Premium Members And Get More In-Depth Stock Guidance and Research
By Daniel B. Kline - Dec 29, 2018 at 6:33AM

It may not match what they actually should be doing.

Promotions are sort of the holy grail of employment. Most workers want more money and to be the boss (or at least a boss), and getting promoted usually makes both of those things happen.

At many companies, however, it's unclear exactly what actions lead to a promotion. Is being good at your job enough? Do you need to curry favor with the boss, or is seniority the key factor? Is working the most hours important or do strong results trump everything?

There's often no clear answer in many cases. Promotions can be won in a variety of ways. Sometimes, there's a method to the madness, and in other cases, it's either arbitrary or at least harder to understand who gets promoted and why.

That doesn't mean workers have no idea what behaviors lead to a promotion. Most agree on the top traits to strive for, according to a new report from Bridge by Instructure, Inc. ( INST ). 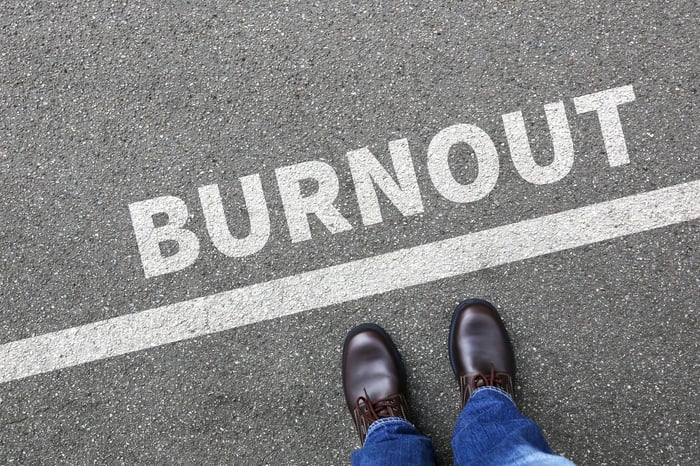 One of the top ways office workers think they'll get them a promotion can lead to burnout. Image source: Getty Images.

What do office employees think?

This creates a culture that can lead to burnout. Workers believe that putting in extra hours impacts how they're viewed by management, and that leads to them working more hours that are less productive. This isn't helped by the fact that the survey also showed that only a third of respondents said their employers encouraged them to take paid time off and only 11% are encouraged to take mental health days as sick days.

"Because of today's workplace atmosphere, many employees aren't able to fully disconnect after traditional work hours and feel they need to work more in order to advance, said Matt Bingham, VP of product for Bridge by Instructure, in a press release: "The study underscores an opportunity for employers to promote greater work-life balance and establish a more frequent feedback loop with employees to help them reach their career aspirations."

What should workers do?

Don't blindly do what you think will earn you a promotion. Schedule a meeting with your boss (and human resources, if appropriate) to talk about your future. Politely express where you want your career to go and ask what it will take to get there.

Make it clear that you understand that there are factors beyond your control involved in getting a promotion -- there needs to be an opening and there may be well-qualified candidates ahead of you. Find out what skills you need to work on and what other boxes you need to check off in order to be in the running.

Be upbeat and open-minded. Find out how to work smarter in order to get ahead. Find out what your boss values. Is it working extra hours? If it is, figure out how to make those hours effective, while also deciding if that's a commitment worth making.

If you know what your employer wants, you can work to deliver it. That's a more sensible approach to getting a promotion than just guessing at what might be the right moves to make.