After a few months of stock market turbulence, Disney (NYSE:DIS) is down 11% from the multiyear highs it reached over the fall of 2018. It's not that Disney itself did anything to upset investors; on the contrary, the company is nearing the closure of its takeover of Twenty-First Century Fox (NASDAQ:FOXA)(NASDAQ:FOX) and recently concluded a 2018 fiscal year in which all of its reporting segments, except for the smallest division (consumer products), notched top-line growth.

The market has nonetheless dragged down the stock as investors worry about a slowing U.S. economy in 2019 and the possibility that corporate earnings could decline. However, while Disney's empire will need to continue adapting to shifting entertainment trends, the stock is currently valued at a one-year forward price-to-earnings (PE) ratio of 14.4 -- compared with a forward PE ratio of 15.3 for the S&P 500 index. The dip in the stock could equate to a great buying opportunity headed into 2019.

Disney owned the podium at the U.S. box office in 2018, with Black Panther, The Incredibles 2, and one of the highest-grossing films of all time, Avengers: Infinity War. Including Fox studios, the soon-to-be-combined movie powerhouse had six of the top 10 grossing movies of the year. The company's studio entertainment segment's revenue increased 19% from 2017 to $9.99 billion.

There's a good chance of a repeat, or even better, in 2019. The conclusion of the Avengers movies comes out in May, and the end of the 40-years-in-the-making Skywalker story rolls out in December with Star Wars: Episode 9. Along the way, moviegoers also get live-action adaptations of Dumbo, Aladdin, and The Lion King. For the kiddos, or adults who refuse to grow up, Toy Story 4 and Frozen 2 are also headed to theaters in 2019. Add in a couple of X-Men spinoffs from Fox Studios, and Disney's box-office dominance in the year ahead looks almost unassailable -- not to mention a potential rebound for the consumer-products segment from toy sales resulting from the upcoming films.

For your consideration: a new streaming TV option

Netflix (NASDAQ: NFLX) may have started the internet-streaming TV revolution, but Disney is readying a heavy counter. The company launched its sports streaming service, ESPN+, early in 2018, and it quickly collected over a million subscribers, but a bigger-impact release will occur sometime during the second half of 2019.

That's when Disney+ launches, delivering Mickey Mouse's long-awaited answer to Netflix. (Hulu, which Disney will own two-thirds of after closing the Fox deal, doesn't officially count in this comparison.) Disney will be able to fill up its catalog with past and present Disney and Fox works, plus a few exclusive spinoffs from the Marvel superhero and Star Wars universes. Plus, all future box office releases, including the aforementioned 2019 lineup, will migrate over to Disney+ or Hulu -- the former taking care of family content, and the latter handling that intended for more mature audiences. 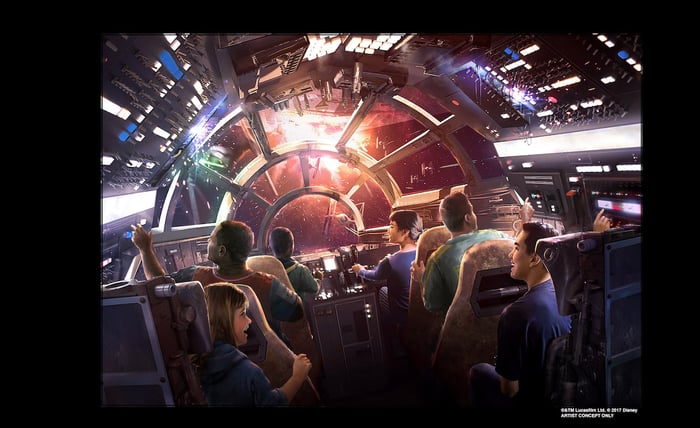 Disney as an investment has long been attractive because of the brand's vertical integration -- in this case, the ability to use its entertainment content in multiple ways; from film studio to product sales to fan experiences. To the last point, Disney will be completing big additions to its parks in California and Florida, including Star Wars Galaxy's Edge. California's will open over the summer of 2019, and Florida's a few months later in the fall.

The openings will complete Disney's first integration of its 2012 Star Wars acquisition into its theme-park business, the company's biggest profit driver last year. Though total sales were less than the media networks segment, parks and resorts contributed $695 million of the company's total $931 million in operating profit growth in 2018. Galaxy's Edge could help sales and profits continue higher as it attracts sci-fi fans from around the world. This will supplement growth from the company's international resorts and parks as global travel continues to rise.

Even though some investors are nervous about what 2019 will bring, Disney has a number of irons in the fire that will provide opportunity for growth no matter which way the economy turns. With shares trading at a reasonable valuation against the next 12 months' worth of earnings expectations, now could be a smart time to buy the dip.