Do markets typically bounce back or keep falling?

2018 has been a disappointment for many market participants, breaking a nine-year streak of positive returns for investors in the S&P 500 ( ^GSPC 2.07% ). Nobody likes losing money, and even if stocks manage to make up a bit of ground on the last trading day of the year Monday, it's unlikely to be enough to offset the 7% year-to-date drop coming out of the weekend.

Yet longtime investors know that getting through bad years is just part of what it takes to find success in the stock market. Looking back over the past half-century, there have been 10 down years for the S&P 500 on a total-return basis. As you can see below, the majority of them have been followed by nice rebounds: 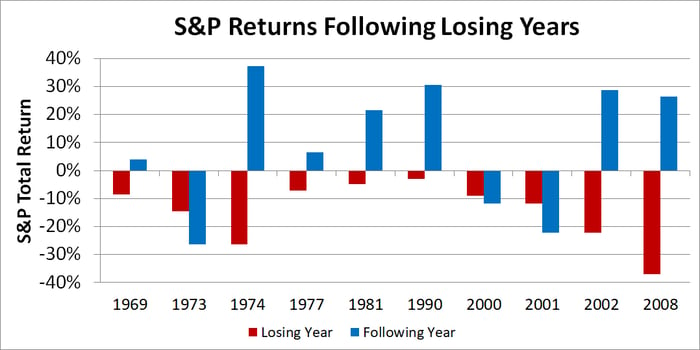 There have been only two multiyear down stretches for the S&P 500 since 1969: once in 1973 and 1974 and once from 2000 to 2002. The 1970s decline stemmed largely from the disruptions to global oil markets, with embargoes against the U.S. and other Western countries causing oil prices to quadruple. The bear market in the early 2000s followed a nearly unprecedented period of strong economic growth, as the tech boom caused markets to climb to levels that proved unsustainable.

Far more often, turnarounds have followed losing years, with robust gains of 20% or more on five of those seven occasions. That's no guarantee that 2019 will produce such impressive results, but it should persuade you that panicking about falling markets in the short run can derail what would otherwise be a winning long-term investing strategy.