While Altria's (NYSE:MO) agreement to take a $13 billion stake in Juul Labs could serve as a backup plan in the event Philip Morris International's (NYSE:PM) application with the Food & Drug Administration for its heated tobacco IQOS device goes awry, it could also make for an awkward relationship if the application is approved. Altria will have an interest in what could arguably be the two most important devices to wean smokers off cigarettes -- but that also means the tobacco giant could have divided loyalties, which could in turn make for a strained partnership. 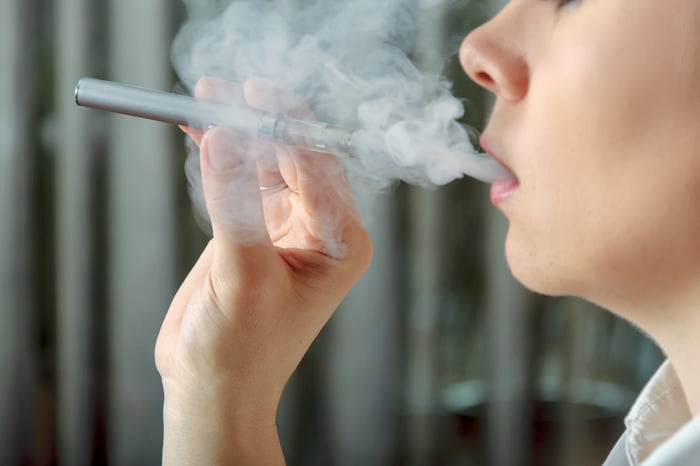 Philip Morris is waiting for the FDA to allow it to advertise the IQOS as a healthier alternative to cigarettes. Right now, no electronic cigarette manufacturer is able to make a reduced-risk claim, and the IQOS would have a significant competitive advantage if it could do so.

Having signed a cross-licensing agreement with Philip Morris five years ago, Altria will have the exclusive right to market the device in the U.S. under its Marlboro brand as "HeatSticks." Altria has discontinued its own MarkTen and Green Smoke e-cig brands, and will take a one-time, pre-tax charge of about $200 million in the fourth quarter related to these product terminations. And in another sign Altria is serious about cigarette alternatives, it is also buying a stake in Canadian marijuana company Cronos.

The financial details of the marketing agreement between Altria and Philip Morris are unknown, but even without a reduced-risk label, the new technology used to heat tobacco to the point it creates a vapor should find a sizable market here. Because the combustion-less IQOS uses real tobacco rather than an e-liquid, it gives the user the closest experience to smoking a normal cigarette. The IQOS is marketed in 43 countries, and in Japan, its largest market, it owns the e-cig market and controls a 15.5% share of the broader cigarette market.

E-cig sales account for just 4% of the U.S. market, and the IQOS will have to overcome the gigantic lead Juul has established. Coming from virtually nowhere just a couple of years ago, Juul has cornered an estimated 75% of the e-cig market, so it's understandable that Altria wants in.

Altria's $12.8 billion purchase of a 35% stake in Juul will not only allow it to begin profiting from the investment right away, but will also immediately help offset the continuing decline in combustible cigarettes. Altria's domestic shipment volume for smokeable cigarettes declined 5.5% over the first nine months of 2018 when adjusted for inventory movements, worse than the 4.5% decline experienced by the industry as a whole, indicating that it is losing market share.

If the IQOS comes to market, Altria has to walk a fine line and promote both brands equally. Philip Morris CEO Andres Calantzopoulos has spun Altria's partnership with its rival by saying "any development that genuinely results in more choices becoming available for the more than 1 billion men and women who smoke today and moves the world closer to eliminating the cigarette should be applauded."

But you have to believe he isn't happy. Any sales Altria makes for Juul will likely come at the expense of the IQOS even as it tries to break into the market. Because Philip Morris has reached a saturation point in Japan, it needs the IQOS to take hold here.

On the other hand, Juul's e-cig is sure to lose some market share to IQOS since it is so dominant -- but it also gets billions of dollars to invest in its business out of the Altria deal, and a partner that has extensive regulatory compliance experience, something it desperately needs at the moment as the FDA considers cracking down on its wildly popular device because of its resonance with teens.

Although Calantzopoulos is right that having more alternatives to traditional cigarettes is better for the health of those currently smoking, it is Philip Morris International that wants to be the one leading them to a healthier alternative. Altria's ownership stake in the leading competitive alternative signals that its Philip Morris partnership will be awkward and possibly contentious.