Please ensure Javascript is enabled for purposes of website accessibility
Free Article Join Over 1 Million Premium Members And Get More In-Depth Stock Guidance and Research
By Leo Sun - Dec 31, 2018 at 11:00AM

The Indian government tries to prevent the two retail giants from locking in brands and consumers.

The Indian government recently updated its policies for foreign direct investments (FDI) in e-commerce platforms, and the changes could throttle Walmart ( WMT -2.48% ) and Amazon.com's ( AMZN -1.81% ) growth in the country.

The new rules, which go into effect on Feb. 1, will ban online retailers from offering exclusive sales, prevent them from selling products in which they own equity interest, and introduce new restrictions on discounts and cashback offers. The rules are aimed at helping smaller retailers compete more effectively against Walmart's Flipkart and Amazon. 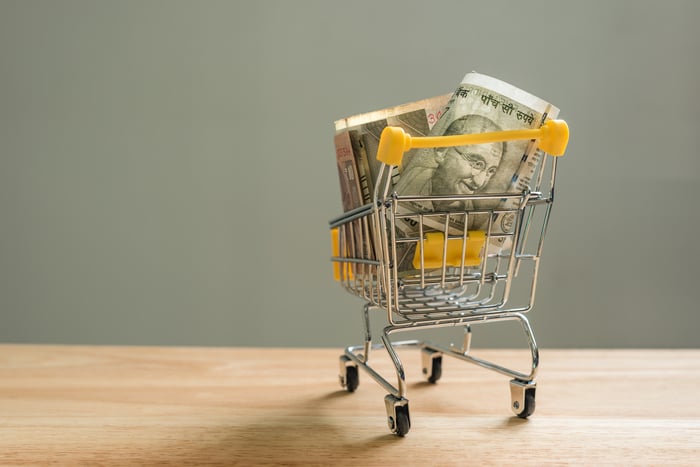 Flipkart and Amazon hold a near-duopoly in India's e-commerce market. RedSeer Consulting claims that Flipkart captured 51% of online orders during the country's five-day festive sale in October, while Amazon claimed 32%, and other e-commerce players claimed the remaining 17%.

How will the new rules hurt Walmart and Amazon?

The new FDI rules could hurt Flipkart and Amazon in several ways. First, both companies frequently partner with big brands to launch platform-exclusive sales, especially for smartphones. Amazon previously launched an exclusive sale with Xiaomi ( XIACF 0.00% ), and Flipkart did the same with Oppo.

The new rules will end those deals, and brands will be restricted from generating more than 25% of their total online sales in India from a single e-commerce marketplace. That rule will also force Amazon to rework some of its joint ventures with Indian retailers.

For example, Amazon's Cloudtail India and Appario Retail joint ventures both generate over 25% of their sales from Amazon and offer exclusive deals on its marketplace. Walmart previously operated in India through a joint venture with Bharti Enterprises, but it failed and the company acquired Walmart India as a wholly owned subsidiary in 2014. Lastly, the ban on equity stakes in sold products could prevent Walmart and Amazon from selling their private-label products, such as the Echo speaker, in India.

The new FDI rules won't completely cripple Walmart and Amazon in India, but they'll significantly reduce their ability to offer exclusive deals and products, or lock in popular brands to attract new customers.

Why India matters to Walmart

Walmart's $16 billion takeover of Flipkart was its largest-ever deal, and it's expected to throttle its earnings growth through fiscal 2020. However, buying Flipkart helps Walmart expand its e-commerce ecosystem and its reach in higher-growth overseas markets -- which reduces its dependence on brick-and-mortar stores and the saturated U.S. market.

Walmart expects online shopping in India to rise 36% annually over the next five years. Morgan Stanley estimates that over half of India's internet users will buy products online by 2026, up from just 14% in 2016. Rising income levels and internet penetration rates are expected to be the primary catalysts.

Before the Flipkart takeover, Walmart only took baby steps into India. It entered the country with its first Best Price store in 2009 and gradually expanded the brand's presence with 23 stores and two fulfillment centers across nine states. That's a tiny footprint compared with its 424 locations in China and 5,352 locations in the United States.

Therefore, acquiring India's largest e-commerce company helps Walmart leapfrog over a brick-and-mortar expansion and go straight to online sales. However, Walmart India recently stated that it will spend about $500 million to open 47 new Best Price stores by 2022 to bring its total store count to 70 -- which could significantly expand its network for online deliveries or in-store pickups.

Why India matters to Amazon

Amazon is the second largest e-commerce company in the world by gross merchandise volume, after Alibaba ( BABA -3.95% ), and it's the top e-commerce player in the U.S. and many other countries.

To complement the growth of its North American marketplace, Amazon is focusing more on the expansion of its international marketplaces -- particularly in higher-growth markets such as India. Back in 2016, Amazon committed $5 billion to its expansion into India, which included big investments in joint ventures, infrastructure, and digital content -- which includes original Indian TV series, streaming music, and books for the Indian market.

Amazon's expansion into India can also widen its moat against Alibaba, which already invested nearly $2 billion in the market through its investments in online grocer BigBasket, e-commerce platform Snapdeal, restaurant review app Zomato, and online ticket app TicketNew. Looking ahead, the new FDI rules could help Alibaba's lineup of second-tier e-commerce players gain some ground against Flipkart and Amazon.

The new rules could hamper Walmart and Amazon's efforts in India, but they probably won't help smaller e-tailers gain much ground against the two market leaders. Therefore, Walmart and Amazon investors should consider these rules to be growing pains instead of long-term threats to their Indian businesses.