Every once in a while, a commodity comes along that captures the hearts of Wall Street. Today, that commodity is lithium. It's one of the critical metals in the manufacture of batteries and is expected to be a critical component for the electrification of vehicles and for making intermittent renewable energy such as wind and solar a 24/7 power option.

Most lithium demand forecasts are enough to make investors salivate, and it has many clamoring to invest in lithium miners. Albemarle (NYSE:ALB) is the world's largest lithium supplier, but it has significant business in other minerals. By contrast, Livent (NYSE:LTHM) is a recent spin-off that generates more than 85% of its business from lithium. Both positions -- market leader or specialist -- have their advantages, but let's take a look to see which one is the best investment today. 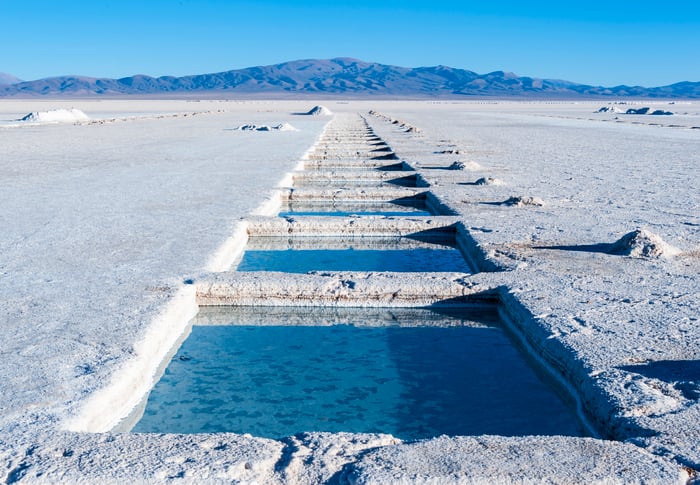 Albemarle is the undisputed leader in the production of lithium carbonate. This is the type of lithium that's produced in evaporation ponds and is the particular base mineral most commonly used to make lithium for batteries. What's perhaps more impressive than its current market-leading position is the company's plan to expand further. Between now and 2021, Albemarle intends to more than double its production of lithium to 165,000 tons per year, and further expansions are in the design phase that could push that number to 265,000 tons per year.

According to Albemarle's market projections, total lithium demand for electric vehicles will reach 800,000 tons per year by 2025. So there is ample room for all these expansion projects in the lithium market and Albemarle will still have considerable market share.

On top of its lithium investments, Albemarle is a major producer of bromine specialty products and specialty catalysts. These two businesses don't have the growth prospects of lithium. However, Albemarle sees them as high-margin cash flow-generating businesses that have very different end markets than batteries and should help provide capital to expand its lithium offerings.

The one downside to investing in Albemarle today is that the stock isn't cheap. Even though it declined more than 30% in 2018, it still trades for about 24 times earnings. That's a hefty valuation for a mining business that's so intimately tied to commodity prices, even one with such large growth plans.

All three of the world's largest lithium producers weren't pure-play investments, until No. 3 producer FMC decided to spin off its lithium business into Livent. All of its mineral extraction involves lithium, and about 88% of it is considered performance lithium that can be used in batteries, specialty greases, and other advanced material applications.

The largest concern with a pure-play investment is how much its prospects can swing with the price of the commodity. Livent mitigates some of that volatility through long-term takeaway contracts with customers such as automotive manufacturers and battery suppliers. However, no contract is sacrosanct, and most are on two- to three-year terms. If we were to see a significant decline in the price of lithium, then Livent's business could suffer even more than others with exposure to other minerals and end markets. 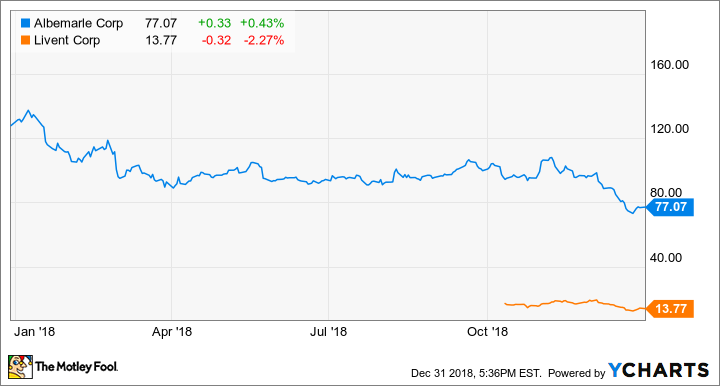 In times of uncertainty, there's safety in diversity

It's becoming more apparent by the day that battery demand is going to go through the roof in the coming years. Electric vehicles by 2040 will represent more than 50% of all purchased passenger vehicles. Even if these projections are ambitious, demand for lithium will grow immensely over the next decade, and there's a great opportunity for growth in this industry.

The challenge for investors is that lithium is a commodity product and there are billions of dollars of capital getting pushed into this business to expand production. That probably means this industry will go through multiple waves of over- and under-supply that will make prices swing wildly. If prices aren't high enough to support an ambitious capital spending program, it could derail a company quickly.

So for investors, it's always handy for a business to have enough diversity to see it through tougher times. So even though Albemarle's stock is a bit on the expensive side, there is some added certainty with its bromine and specialty catalyst businesses that it can handle the extreme volatility we're likely to experience in the lithium business over the next several years.