Please ensure Javascript is enabled for purposes of website accessibility
Log In Help Join The Motley Fool
Free Article Join Over 1 Million Premium Members And Get More In-Depth Stock Guidance and Research
By Daniel B. Kline - Jan 3, 2019 at 6:00AM

The company that has changed so much started under modest circumstances.

Millions of people know the names of Steve Jobs and Steve Wozniak, two of the three men who founded Apple (AAPL 1.62%). The third, Ronald Wayne, has not achieved quite the same level of fame, perhaps because he did not make it very long with the company.

Jobs and Wozniak were the brains behind the Apple I -- an attempt to build an affordable computer -- and each held 45% of the company, with Wayne owning 10%. His job, which proved to a be a stressful one, was to arbitrate disputes between the two Steves. That was a task Wayne decided was not worth it, and he sold his stock back for $800 before the company officially incorporated on Jan. 3, 1977.

That proved to be a billion-dollar mistake (though Wayne did eventually receive an additional $1,500 for his shares). The little-known third Apple founder not only missed out on fame and fortune -- he walked away from a company that has changed the lives of most Americans. 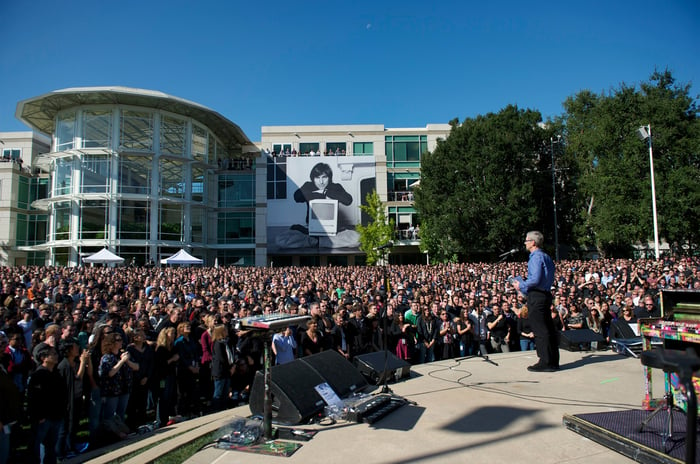 Apple's second computer, the Apple II, changed expectations for personal computers. That led to the Lisa, credited with the first ever graphic user interface (GUI), instead of the word-based "DOS" operating system used by Microsoft (MSFT 1.07%).

The Lisa bombed, but its successor -- the Macintosh -- became a modest hit. It was easy to use, had an intuitive interface, and was different from the other personal computers that dominated the marketplace.

The real success of the Mac was where it ultimately led computing. This was the machine that established the idea that computers could offer something for everyone without the learning curve that DOS required. That's a lesson that Bill Gates and Microsoft heeded -- moving away from the text-based interface and eventually bringing out Windows in 1985.

After that, Apple could have become a niche player. In 1985, Wozniak left the company and Jobs was fired, leaving the company without its iconic founders and lacking direction. For most of the late 80s Apple was a modest success -- adding color Macs and the PowerBook laptop, and failing spectacularly with the Newton tablet and the PowerPC.

John Sculley, the CEO who fired Jobs, lost his job over those failures, and successor Michael Spindler did not do much better. He was replaced by Gil Amelio, whose greatest contribution was buying Jobs's NeXT start-up and bringing the founder back to the company. That wasn't great for Amelio, but it began Apple's rise from interesting niche computer company to dominant technology player.

Jobs's 1997 return led to his being named interim CEO in 1998 and permanent CEO in 2000. That period also included an incredible run of product success, beginning with the iMac -- a more affordable Apple computer that pushed the company beyond the graphic design and education markets where its early computers had carved out a niche.

Still, while the iMac was a bigger success than its predecessors, Apple was still well behind Windows-based machines when it came to sales. The real game changer was the 2001 release of the iPod. The music player became not just a hit for Apple but the category leader -- a status it would hold until the iPhone's release in 2007.

iPod and iPhone established Apple as a company that could lead the market consistently, creating product categories where none had existed before. The iPhone has been a smartphone sales leader since 2007, setting the standard for what smartphones should be. That drove the success of iTunes (though that started with the iPod) and the App Store. The iPhone also paved the way for the iPad -- and helped increase the company's computer sales.

Apple has proven that it can sell high-end products to a mass audience. The iPhone has been the company's sales leader, accounting for as much as 70% of its sales, but the Apple brand has become the company's most important asset. The name Apple stands for a level of quality and an unwillingness to compromise that resonates with many customers.

In some cases, Apple's focus on the high-end has limited sales. For example, cheaper competitors have taken tablet share away from the iPad and products like the Amazon Echo have made Apple's HomePod a tough sell.

However, Apple has established itself as an innovation leader and a brand that resonates with customers. That makes it the rare company that can get consumers to pay $159 for wireless earbuds or over $1,000 for a new phone year after year.

Jobs, of course, passed away in 2011, but his legacy of innovation continues. When it incorporated on Jan. 3, 1977, few could have imagined that it would become one of the most influential technology brands in the world, but that's exactly what happened.