Stanley Black & Decker's share price might have dropped 29% in 2018, but wait at least until the end of January to buy the stock.

The last time Stanley Black & Decker (SWK -0.46%) stock ended a year deep in the red was in 2008. If you think that must've been a steep drop, consider that 2018 was worse, with shares of the tool manufacturer losing nearly 29% in value. In short, 2018 has been the worst year in at least a decade for Stanley investors. Ouch.

Does that mean Stanley's bull run is over for good, or should you keep your hopes alive for 2019? To be sure, the near-term headwinds for Stanley are real, but much of the pessimism may already be factored into the stock price. The company is still generating solid sales, making money, and rewarding shareholders. Yet you might want to wait a few days before buying the stock. Here's why. 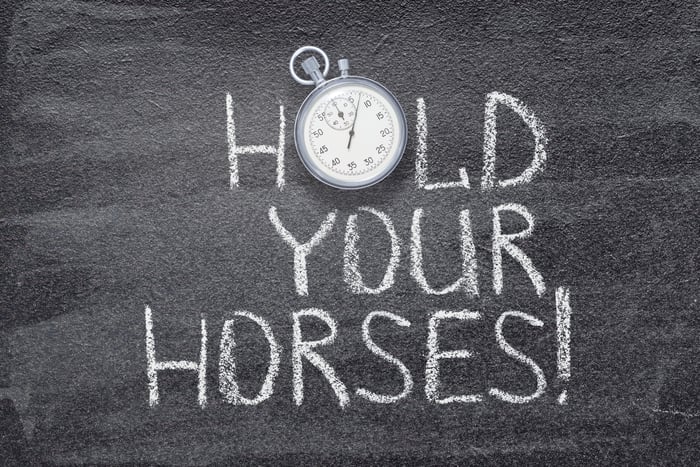 Why Stanley shares bled in 2018

Stanley shares soared nearly 48% in an incredible run-up in 2017. The manufacturer of hand and industrial tools, storage, and security services was, after all, firing on all cylinders: It grew revenue and earnings per share by 12% and 23%, respectively, in fiscal 2017.

Ironically, that full-year earnings report released in January 2018 also marked the reversal in Stanley's shares, thanks largely to management projecting organic sales growth of 5% and GAAP earnings of $7.80 to $8.00 per share for FY 2018. That indicated a slowdown from the company's organic growth rate of 7% and EPS of $8.04 in 2017.

By April, Stanley had trimmed its FY 2018 earnings guidance to $7.40 to $7.60 per share after taking a hit from a one-time tax and expenses related to the acquisition of Nelson Fastener Systems. Meanwhile, the U.S. had just slapped tariffs on key industrial inputs like aluminum and steel, triggering fears of deeper cost pressures on Stanley. Investors weren't wrong: Stanley downgraded its outlook in July for the second time in the year, this time forecasting EPS to be $7.00 to $7.20.

The biggest blow, however, came only recently when yet another guidance rollback coincided with the market rout to send Stanley shares plunging in a matter of months. As things stand now, the company expects to earn only $5.90 to $6.00 per share this year, or nearly 13% lower earnings from 2017 even at the higher end of the range.

So what's ailing Stanley? Several factors, I'd say, including higher input costs thanks to stronger commodity prices and tariffs, foreign exchange headwinds, and lower organic growth. That last bit in particular is important, as investors want to see the company grow organically rather than bank on acquisitions. From that standpoint, 2019 could be a muted year.

What to expect from Stanley Black & Decker in 2019

To combat rising cost pressures, Stanley intends to hike prices of products and services from January 2019. Management considers it a "wild card" move at best.

The thing is, management isn't ruling out the possibility that Stanley's sales volumes could take a hit as prices rise, which is why it has also initiated a restructuring program to save $250 million in costs in FY 2019 and offset any setback in volumes. The move, however, may not help if sales decelerate faster than expected and input costs continue to rise.

Stanley, for its part, sees several revenue growth catalysts for 2019, including:

While these catalysts sound convincing, not all of Stanley's end markets are going great guns. The security segment is the biggest example, which saw its profit margin slip below 10% through the nine months ended Sept. 30, 2018, on flat sales. Comparatively, Stanley's other two segments, industrial and tools and storage, earned nearly 15% margins each during the period.

Keep an eye on this key upcoming event

One thing's for sure: Stanley's fourth-quarter numbers, coming up at the end of January, will be weak given the cost headwinds and an expected pre-tax restructuring charge of $125 million, among other things. What investors need to focus on, though, are the company's plans to tackle headwinds and its guidance for 2019. I'd suggest you wait some days for clarity before dipping your fingers into Stanley shares. To be clear, I still consider Stanley, a Dividend King, a great long-term investment, but when the management of a company foresees headwinds in the near term, you'd want to be cautious.

This Dividend King Is Getting Hammered. Time to Buy?