Here's a bargain stock for intrepid value investors to consider.

Recreational vehicle (RV) manufacturer Thor Industries' (THO 2.69%) first-quarter fiscal 2019 earnings report, released in December, seemed to validate concerns investors held through most of calendar year 2018, a period in which the "THO" symbol lost 65% of its value, even as Thor posted record sales results in spring and summer. In the first quarter of fiscal 2019 (three months ended Oct. 31), year-over-year sales declined 21% to $1.8 billion, while gross margin slipped roughly three percentage points to 11.8%.

Both Thor and competitor Winnebago Industries (which itself suffered a 55% stock price drop last year) have had to adjust their manufacturing production levels recently, as independent RV dealers optimistically overstocked on inventory in the first half of 2018 following a surge of retail demand in 2017.

Thor, in particular, offered promotional discounts in its most recent quarter in an attempt to help dealers right-size inventory on their lots, which contributed to its double-digit sales decline for the three-month period. 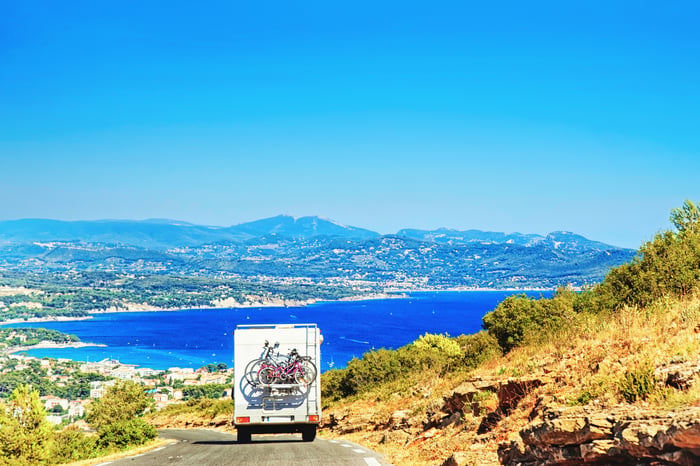 Yet the company enters the new calendar year with a much-improved ability to adjust production and meet variable demand levels, having allocated roughly $253 million in capital expenditure over the last two fiscal years to improve its manufacturing capacity.

While an investment in the RV industry still entails some near-term risk, shares of Thor may appeal to value-oriented investors who are willing to patiently build a position. In its first-quarter earnings filing, Thor's management predicted that dealer inventories would likely normalize by year-end (i.e., the end of 2018) and that wholesale shipments in the industry will soon return to a one-to-one replenishment relationship with retail sales.

Why Thor shares are so cheap

Thor currently trades at just 7.8 times forward earnings. That's a discount of 42% against a peer group comprised of stocks in the S&P 400 MidCap Index, which trade on aggregate at 13.5 times forward earnings. Moreover, the company's price-to-book value has plummeted from nearly 5.0 at the beginning of 2018 to just 1.4 today. This means that the market value of Thor's stock is approaching the company's book value -- a time-honored buy signal for value investors.

As for the reasoning behind these meager valuations, the market is concerned that a potential economic slowdown in the U.S. will curb discretionary consumer spending, thus punishing RV manufacturers. However, the organization's capacity optimization should insulate it against a moderate decline in retail sales. In addition, Thor still has a sizable order backlog between its motorized and towable RV segments. This $1.7 billion in cued-up production will provide insulation against variable retail sales in the coming year.

The market is also discounting the benefit of Thor's pending acquisition of German RV manufacturer Erwin Hymer Group (EHG). This transaction was announced in September 2018 and is slated to close in the current quarter. EHG will add $2.9 billion in annual sales to Thor's operation, giving the combined entity an annual top line of $11.2 billion and making Thor the world's largest RV manufacturer. It will also transition Thor from a 100% sales concentration in North America to a projected annual mix of 76% North American sales and 23% European sales (with 1% attributed to other international sales).

Why hasn't the market given Thor any credit for this acquisition? First, shareholders will bear some dilution upon deal closing, as the owners of EHG are set to receive 2.3 million shares of Thor as part of the total purchase price consideration. At the current share price, this is equal to about $120 million, or 4.5% of Thor's total market capitalization of $2.7 billion.

For near-term investors, the issuance is a penalty, but for those with a long holding period, the dilution should be a nonevent, as management intends to repurchase shares "both opportunistically and systematically" to offset the impact to shareholders.

Investors may also be penalizing Thor for the $3.05 billion in debt it will load onto its balance sheet to complete the transaction, between a $2.3 billion term note and a $750 million asset-based credit facility.

Currently, Thor's balance sheet is free and clear of long-term debt. But its debt-to-earnings metrics won't skew toward an extreme reading with the new borrowings. Let's assume that EHG generates at least as much EBITDA as Thor per dollar of revenue (Thor hasn't disclosed EHG's profitability metrics yet). In this case, the $3 billion in new debt held by the combined company will create a debt-to-EBITDA ratio of approximately 3.85, which is a moderate leverage reading.

Investors should note that management has already stated its intention to treat the EHG deal in a manner similar to Thor's acquisition of RV manufacturer Jayco, in which it paid down a $500 million debt facility within two years following the June 2016 transaction.

Opportunity for a gradual accumulation of shares

While Thor Industries stock may represent a bargain for longer-term investors, it's probably wise to buy it in increments. As of this writing, the overall market, having capped its first negative year across major indices since the Great Recession, is still exhibiting marked weakness. And any further erosion of consumer confidence could temporarily impact sales of big-ticket discretionary items like RVs in 2019.

Still, given Thor's imminent global footprint and a more accurate inventory position vis-a-vis demand, an investment in this manufacturer is likely to handsomely reward value investors who can afford a holding period of at least one to three years.