In August of 2018, graphics specialist NVIDIA ( NVDA 2.20% ) announced the first of its next-generation graphics processors aimed at the PC gaming market, known as the GeForce RTX series. That lineup consisted of three models: GeForce RTX 2080 Ti, GeForce RTX 2080, and GeForce RTX 2070. (The higher the model number, the better the performance and the fatter the price tag.) 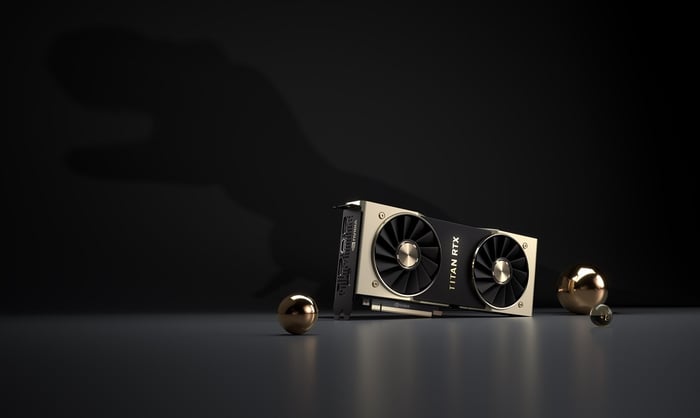 Now, the truth is that NVIDIA needs to offer even lower-priced graphics card options to fully serve the market. (At its analyst day last year, the company said that the average GeForce GTX-based graphics card sold for $200.)

To serve that market with a new generation of graphics processors, NVIDIA is doing something a bit unusual. However, I think this move makes perfect sense, and I hope that once I've explained it, you'll agree.

There have been some credible leaks to suggest that in addition to launching the GeForce RTX 2060, NVIDIA will also be outing a part called the GeForce GTX 1160. NVIDIA currently sells the GeForce GTX 1060 into the mid-range of the PC gaming GPU market, and this purported GTX 1160 seems like a more incremental successor to the GTX 1060.

Indeed, according to VideoCardz, a website that has a good track record of reporting information about prerelease computer hardware products, NVIDIA will be selling parts branded as "GeForce GTX" with model numbers that begin with "11" instead of "20" at price points lower than that of the RTX 2060.

The GTX 11-series parts will reportedly still be based on the same basic NVIDIA Turing graphics architecture that the RTX 20-series cards are, but according to one leak (via VideoCardz), the former won't have support for NVIDIA's RTX ray-tracing technology.

Why does this make sense?

There are both technical and business reasons that this makes sense. The chips that the GTX 11-series will be based on don't seem as though they'll actually have the built-in circuitry to support NVIDIA's RTX ray-tracing features (although we don't know for sure). Since such lower-end graphics processors wouldn't have the requisite grunt to run games at high quality settings with those features enabled anyway, it makes sense to strip those chips of features that would, in all likelihood, just sit there and take up space.

That translates into a good business move in two ways. First, silicon that sits there and takes up space without any real benefit makes a chip bigger and therefore more costly to produce. If NVIDIA can't get paid for the silicon real estate that it's using up for those features, it might as well strip them.

On top of that, by restricting RTX technology to the higher-end parts, NVIDIA creates an additional selling point for its pricier products, which could potentially translate into a richer product mix for the company, boosting revenue and earnings. (The onus is now on NVIDIA to continue to work with developers to make sure both that RTX technology is widely adopted and that the performance is usable on any cards with the technology built in.)