Investors had reason to be optimistic Friday after Fed comments and a blowout jobs report.

Shares of TripAdvisor Inc. (TRIP 0.60%), a leading travel metasearch company offering reviews and information on restaurants, hotels, vacation rentals, and a plethora of experiences, are up 5.5% as of 3:33 p.m. EST Friday. They followed the markets' surge higher after Federal Reserve Chairman Jerome Powell delivered a positive message.

The S&P 500, Dow Jones Industrial Average, and Nasdaq were up 3.44%, 3.30%, and 4.20%, respectively, after Powell delivered a message investors wanted to hear as he walked back his December comments that rattled the markets. Essentially, Powell noted the Fed will be flexible on policy and is in no hurry to raise interest rates, a softer stance than previous comments that the central bank was on "autopilot" for winding down the balance sheet. This position comforts investors concerned that the Fed was heading toward hiking interest rates too far, similar to instances in 2000, 2004, and 2006. 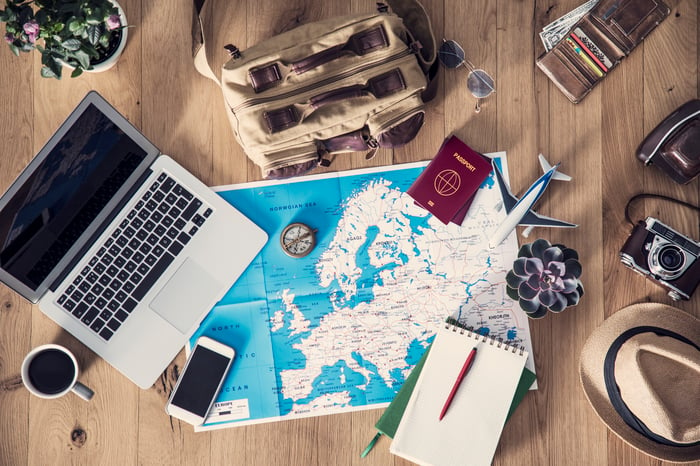 Another positive note, a little more in tune with TripAdvisor specifically, was a blockbuster December jobs report. Payrolls increased by a better-than-expected 312,000 jobs during the month, and the unemployment rate rose to 3.9% from 3.7%, because the participation rate jumped to 63.1% as more people entered the workforce. This is great news for travel companies in general, because a stronger labor market and a lower chance of a recession open the door for more consumer travel.

While Friday's broader market rise, strong December jobs data, and a softer Fed stance are all positive developments, investors would be wise to refocus on their core TripAdvisor thesis over the long term. TripAdvisor reported a strong third quarter with evidence its turnaround was gaining traction. Management also upped its 2018 outlook in early November, thanks to a brightening profit picture and improving costs. And if the hotel business returns to growth during the fourth quarter, it could set the stage for a much more profitable 2019.