Please ensure Javascript is enabled for purposes of website accessibility
Log In Help Join The Motley Fool
Free Article Join Over 1 Million Premium Members And Get More In-Depth Stock Guidance and Research
By Demitri Kalogeropoulos - Nov 13, 2018 at 9:02AM

Sometimes it takes a few tries to get a turnaround going. TripAdvisor (TRIP 5.57%) stumbled last year when a pivot of its business model failed to deliver the results that management targeted. The travel-booking specialist's executives said in late February that they weren't happy with key operating metrics, including profitability and sales growth.

Things are looking a lot better now. In its recent third-quarter report, the company had plenty of data points that it could highlight to show how well its new rebound initiatives are working. Let's take a look at the biggest ones. 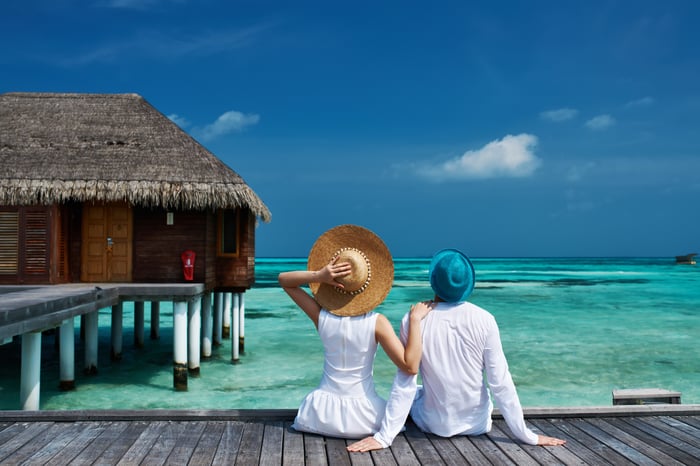 Sales in the core hotel business declined by 2% to mark an encouraging improvement over the prior quarter's 4% drop. Looking deeper into that segment shows other reasons for optimism, too.

Revenue per hotel shopper returned to positive territory for the first time in over a year, with that figure now having improved for three consecutive quarters. Click-based transaction revenue was still negative, but the metric also improved for a third straight time. "What a difference a year makes," the company said about the hotel division's results in prepared remarks.

TripAdvisor's shift toward a more efficient spending model paid off during the quarter, as adjusted earnings spiked 54% in the hotel segment. The company has been scaling back on its online advertising, especially in some of its lowest-return channels. The move has lowered traffic but produced a much more profitable business. In fact, adjusted margins jumped to 32% of sales this quarter, up from 28% in the prior quarter. The margin figure was at 16% one year ago.

The company's non-hotel division, which is comprised of bookings for attractions, restaurants, and rentals, is becoming an important contributor to sales and profit results. Revenue jumped 20% this quarter to $153 million, or just over one-third of the broader business.

The segment was profitable but is still firmly in growth mode as management focuses on adding to its portfolio of bookable products in hopes of capturing a dominant position in this emerging market. "TripAdvisor's differentiated brand and massive mobile footprint provide ample opportunity for revenue growth, market share gains, and attractive long-term returns," explained the company's prepared remarks.

Executives took the opportunity to raise a few key parts of their 2018 outlook to reflect the stronger sales and profit trends. Importantly, the company predicts the hotel business will return to growth in the fourth quarter after several consecutive quarters of declines. The non-hotel segment should expand at a faster clip of around 25% as TripAdvisor extends its lead in this emerging market. In even better news for investors, CEO Steve Kaufer and his team now predict "healthy" adjusted earnings growth overall, compared to their initial expectations of just barely achieving break-even results.

That outlook was issued back in February when the company was struggling to generate solid profit growth under the weight of two major headwinds: the shift toward mobile browsing and management's initiative to cut underproductive advertising spending. For the first time in over a year, investors can see how TripAdvisor might navigate these changes while emerging as a bigger, more profitable business in 2019.