Looking for income stocks that promise dividend growth? Check out these three.

Dividend growth or dividend yield. Which should investors prefer?

I'm firmly in the "growth" camp since I'm still a few decades away from retirement. That's why I like to search for income stocks that hold strong profit and dividend growth potential.

Mastercard (MA 0.99%), Activision Blizzard (ATVI 0.36%), and Moody's (MCO 1.56%) are three dividend payers that have all caught my eye. Here's why investors should expect big growth in their dividends from here. 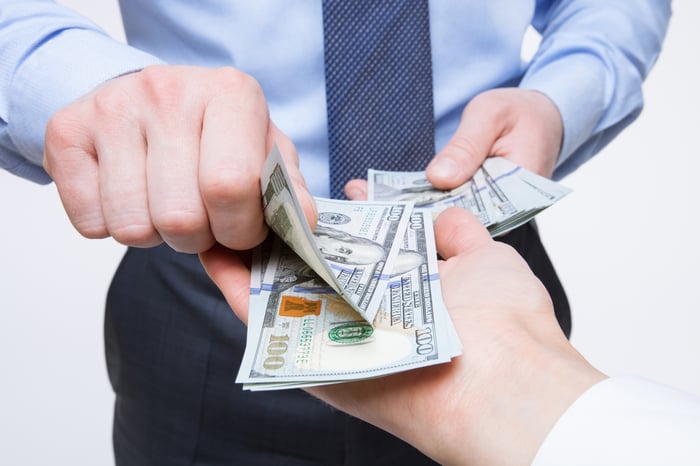 Payment processing giant Mastercard started paying out a small dividend in 2006. The company's business has grown significantly in the pursuing years as demand for paying with plastic has steadily caught on. The company's revenue and profits have grown in lockstep with the beefed-up demand. That has enabled management to return an ever-increasing amount of capital back to shareholders.

Mastercard has primarily chosen to reward its investors with stock buybacks, but the company has placed an emphasis on dividend growth in the last few years. The dividend payment was just $0.11 per quarter in early 2014. That number was just raised to $0.33 per share, which represents a tripling in just four years.

Income-focused investors will rightly point out that Mastercard's dividend yield is a paltry 0.7% right now. That's a fair criticism, but a good counterpoint is that the dividend only consumes about 20% of profits. That presents the company with plenty of room to continue boosting its dividend payments.

Meanwhile, analysts currently predict that Mastercard will pump out profit growth in excess of 23% annually over the next five years as it continues to win new business across the globe. That's an impressive growth rate for a business that is worth nearly $200 billion.

Overall, I think that Mastercard's investors have plenty of reasons to expect that its dividend will continue to grow quickly from here.

Video game companies like Activision Blizzard are usually thought of as growth investments, so it may surprise you to learn that the company has been paying out a dividend since 2011. The payout has increased steadily with each passing year, too.

Unlike most American stocks, Activision only pays out its dividend once per year. The payout usually occurs in March, which is only a couple of months away. Investors won't have to wait long to see if the company can keep its growth streak alive.

Activision's current dividend yield of 0.7% isn't much, but the payout ratio is just 14% of profits. That means that there is plenty of room left for this dividend to grow, even if profits were to stand still.

That's not what investors expect to happen, though; Wall Street currently projects that Activision's profits will grow in excess of 11% annually over the next five years. The growth is expected to be driven by the continued rise of esports, the move into physical toys, and the push into advertising.

Despite the company promising double-digit profit growth and a fast-rising dividend, Activision's stock has fallen on hard times in recent months. Shares can be purchased for just 17 times 2019's earnings estimates. That makes this Fool believe that Activision is a great growth stock for income investors to get to know.

Bond-rating giant Moody's has been putting cash in its investors' pockets since 1994. While the company's payout has fluctuated from year to year, management has placed a renewed emphasis on consistent dividend growth since 2009. Back then, the dividend payment was just $0.10 per quarter. That number currently sits at $0.44 per share, which represents a quadrupling in a decade.

The strong dividend growth has pushed the company's yield up to 1.3%, which is the highest number in this list. Even with the growth, Moody's payout ratio is just 23%. That suggests that the company could easily afford to double its dividend from here.

The payout ratio looks even more modest when you factor in the expected profit growth from the company's acquisition of the business analytics provider Bureau van Dijk last year. The purchase is helping to drive double-digit revenue growth and provides the company with numerous opportunities to boost margins. That's why Wall Street believes that the company should be able to grow its profits at a 14% annualized growth rate over the next five years.

Meanwhile, the recent market sell-off has pulled down the company's valuation to just 17 times forward earnings. That's an awfully tempting price for a high-quality business that promises fast earnings and dividend growth.