Please ensure Javascript is enabled for purposes of website accessibility
Log In Help Join The Motley Fool
Free Article Join Over 1 Million Premium Members And Get More In-Depth Stock Guidance and Research
By Asit Sharma – May 2, 2018 at 2:47PM

The impact of an acquisition, coupled with healthy organic growth, provided the basis for a record quarter.

In its first-quarter 2018 earnings report released April 27, Moody's Corp. (MCO 3.12%) reported record first-quarter revenue growth, as well as a healthy improvement in operating income. The ratings specialist is benefiting from a relatively smooth integration of business analytics provider Bureau van Dijk, following its purchase of the firm last August. After reviewing the quarter's raw numbers, let's walk through the dynamics of the combined company: 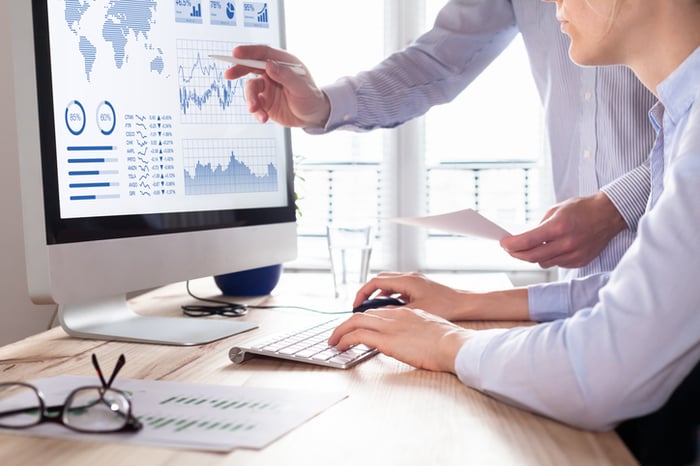 During the first-quarter earnings conference call, Moody's CEO Raymond McDaniel Jr. provided the following update on the progress of the integration of Bureau van Dijk into the Moody's system:

After nearly nine months since closing the acquisition, our integration efforts are on track.

We've met our legal and regulatory requirements, and executed cost reductions without disruption to the business. In March, we completed a right-sizing program to realize efficiencies across the combined employee base, thus reducing compensation expense.

In short, we're making good progress on the synergies that we anticipated when we announced the transaction, and the legacy Bureau van Dijk business continues to deliver results consistent with its historical performance.

Moody's management made some slight tweaks to full-year earnings guidance alongside the first-quarter report. Within the MIS segment, Moody's now expects slightly slower growth in corporate finance, and a bit faster expansion within structured finance.

Together, these modifications don't change the big picture. The company still expects a full-year revenue increase in the low double digits, and forecasts diluted earnings per share of between $7.20 and $7.40. Hitting the middle of this range would represent a 40%-plus jump against 2017 earnings.

3 Growth Stocks Worth Owning for the Next 50 Years