Please ensure Javascript is enabled for purposes of website accessibility
Log In Help Join The Motley Fool
Free Article Join Over 1 Million Premium Members And Get More In-Depth Stock Guidance and Research
By Brian Feroldi, Travis Hoium, and Leo Sun - Dec 9, 2017 at 6:15AM

These three stocks are tailor-made for buy-and-hold investors.

We Fools agree with Warren Buffett that the ideal holding period is "forever." However, finding a truly great business that can stand up to the test of time is no small tall task. Which companies do we think can be owned with a multi-decade time horizon? We asked three Motley Fool investors to weigh in, and they picked Facebook (META -1.64%), Square (SQ -3.73%), and Moody's (MCO 0.01%) 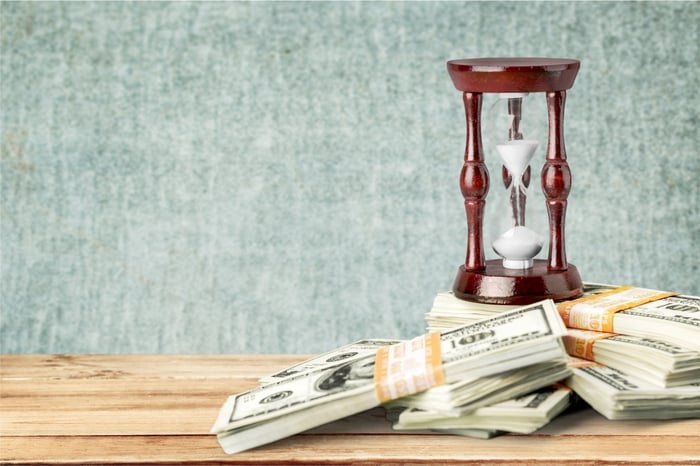 The biggest social network in the world

Leo Sun (Facebook): I believe that Facebook, the world's largest social network, will still be a dominant tech company in 50 years. Facebook serves 2.07 billion monthly active users (MAUs) on its namesake site, 1.2 billion MAUs on its Messenger app, 1.3 billion MAUs on WhatsApp, and another 800 million MAUs on Instagram -- making it the undisputed king of social networking.

Facebook also became an early mover in the virtual-reality (VR) market after acquiring Oculus in 2014. It launched the commercial version of the Oculus Rift headset last year and introduced "Spaces," which turns social networking into a VR experience, offering immersive experiences and VR-based social games.

Facebook's ecosystem is still expanding, with local business pages (65 million at the start of 2017), Workplace (its Slack rival that serves over 30,000 businesses), and new live and 360-degree video features. It's also providing free internet access to unconnected areas via solar-powered drones and partnerships with local telcos -- which could tether billions of new users to Facebook's platform.

Facebook's revenue and earnings are still growing at double-digit rates, with most of that money generated by ad sales. But that should change over the next few decades as its social platforms expand into adjacent markets and the company launches new products and services for its captive audience. As long as mobile technology improves and people keep sharing photos, videos, and experiences, Facebook should remain a top long-term stock to own.

Travis Hoium (Square): The financial industry is becoming more digital by the day, with credit card use growing and other digital-payment solutions beginning to replace cash transactions. One company creating the services to build that digital payment future is Square, which is much more than the company that makes the credit card readers we're familiar with.

Square builds the infrastructure businesses use to operate every day. The point-of-sale system is the first touchpoint, creating an easy interface for companies and customers. But the company has built out services like calendars, payroll, invoices, and even a capital arm that will provide loans to businesses. This allows Square to be an integral part of a business' operations, and the more services a customer uses, the longer they're likely to pay the company's 2.75% swipe fee for credit cards.

What could really take Square to the stratosphere is its disruption of banking, more broadly. The peer-to-peer payment system Square Cash is a popular way to transfer money, and could eventually be so much more. I could see Square being a bank account used by millions of consumers, which allows for payments to retailers or friends, all with the ease of use that Square is known for. This could further weave the company into people's lives, and lower the costs that are currently going to credit card networks or banks.

Given its disruptive position in the finance industry, Square has a very bright future. And 50 years from now, it could be the digital-payment company or bank we all use every day.

Brian Feroldi (Moody's): Technology is changing so rapidly that it's impossible to predict what the world is going to look like in 50 years' time. However, my hunch is that the world's economies will still rely on credit to function properly 50 years from now. If true, then there still will be plenty of demand for the services that companies like Moody's offers.

Moody's is one of the "big three" credit rating agencies -- the others are Standard & Poor's and Fitch Group. When a public or private entity wants to float a bond, one of their first steps is to reach out to a credit rating agency to get it rated. Why? Because potential buyers want an opinion on the risk profile of the bond from a trusted third party before they commit. Since Moody's has been rating bonds for decades, it's a natural go-to partner for issuers.

For investors, what's attractive about Moody's is it's an asset-light business that throws off gobs of cash flow. After all, you don't need tons of machinery or equipment to rate bonds. What does management do with all of that cash? It buys back stock, raises the dividend, and makes the occasional acquisition.

This combination has worked out wonderfully for shareholders over the long run. 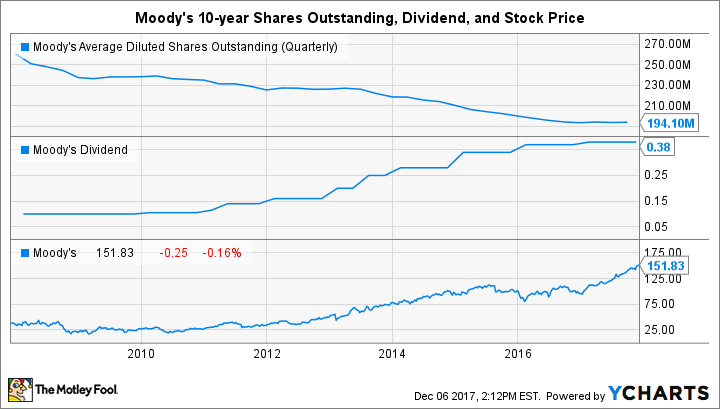 I think that investors can bank on Moody's to run this winning playbook for years to come. That's why I think this is a wonderful buy-and-hold candidate.