Please ensure Javascript is enabled for purposes of website accessibility
Log In Help Join The Motley Fool
Free Article Join Over 1 Million Premium Members And Get More In-Depth Stock Guidance and Research
By Asit Sharma - Updated Feb 16, 2018 at 9:38AM

The company boasted record revenue in the fourth quarter of 2017, and offered a healthy outlook for this year.

Moody's Corp. (MCO -2.59%) rounded out 2017 with both of its major segments, Moody's Investors Service (MIS) and Moody's Analytics (MA), continuing their recent quarterly trends of double-digit percentage growth. After a review of summary numbers, let's delve into the quarter's details, and also discuss management's bright forecast for 2018:

Data source: Moody's. *Not applicable; difference too great for a meaningful comparison. 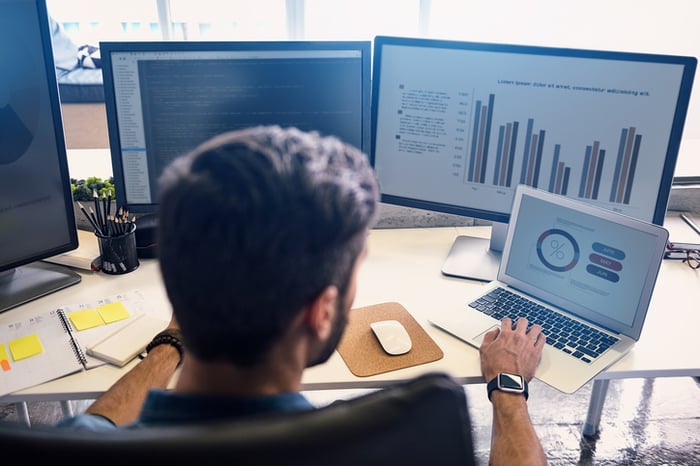 Our integration efforts are on track and we remain confident about achieving the synergy targets that we communicated when we announced the acquisition. Since closing the acquisition in August, we have enhanced Bureau van Dijk's products with content sourced from Moody's, launched programs to cross-sell Bureau van Dijk products, and initiated measures to enhance sales productivity and efficiency.

In New York, San Francisco and Hong Kong, Bureau van Dijk's staff are now co-located at Moody's offices, with six additional offices in Europe, Asia and South America set to be combined in 2018. Bureau van Dijk's business continues to perform well and we are very pleased with the progress we're making as we pursue our various collaboration and integration efforts.

The synergy targets McDaniel refers to (i.e., expected expense savings from the business combination) are projected to reach $45 million annually by 2019, and $80 million by 2021.

Moody's also issued healthy full-year guidance. The organization expects its revenue to improve in the low double-digit percentage range, with operating expenses also projected to rise at a low double-digit rate. Moody's outlook calls for adjusting operating margin to hit 48%, roughly in line with its full-year 2017 margin of 47.3%.

The company will benefit from a lower effective tax rate due to the recently passed tax cuts. Management expects Moody's' tax rate to fall between 22% and 23%, down sharply from its 2017 tax rate of 43.6%. The organization has quantified this benefit at approximately $0.65 per share. Overall, Moody's is targeting year-long diluted earnings per share (EPS) of between $7.20 and $7.40, which at the midpoint would represent an impressive improvement over 2017's full-year diluted EPS of $5.15.

3 Growth Stocks Worth Owning for the Next 50 Years