In an ominous sign, California Pacific Airlines has suspended all service from its hub in Southern California for a month or more.

Late last year, long-awaited airline start-up California Pacific Airlines finally got off the ground after nearly a decade of planning. The airline's founders planned to carve out a niche in the San Diego region by operating flights at McClellan-Palomar Airport in the northern suburbs. By contrast, local market leader Southwest Airlines (LUV 1.51%) -- and every other major airline -- serves the city through San Diego International Airport.

However, California Pacific got off to an extremely rough start, with widespread flight delays and cancellations. Now it has suspended all service at its Carlsbad, California, base until at least February. That doesn't bode well for the carrier's short- or long-term survival.

California Pacific Airlines began flying from McClellan-Palomar Airport in early November. Its operations were extremely unreliable from day one. Indeed, a maintenance problem delayed its first departure by nearly half a day.

That was just the beginning of the new airline's struggles. In addition to its West Coast service, California Pacific Airlines also operates federally subsidized Essential Air Service (EAS) flights from two cities in South Dakota to Denver. (This is a legacy of California Pacific's founders' having purchased an existing airline to avoid the lengthy process for receiving a new FAA certification.) One of the company's four jets was damaged at the airport in Pierre, South Dakota, in late October. It took more than a month to repair it.

While that jet was out of service, California Pacific experienced maintenance problems with some of its other aircraft. At one point in early December, only one of its four aircraft was operational. 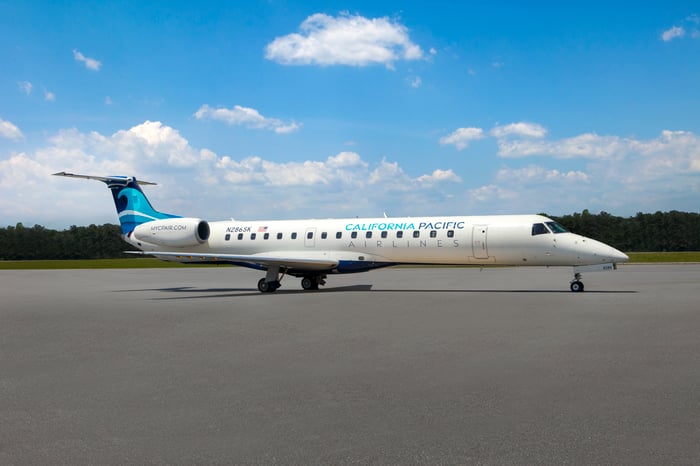 Not surprisingly, the situation wreaked havoc on its schedule. Between the middle of November and late December, the airline canceled more than 25% of its EAS flights in South Dakota, jeopardizing its lucrative EAS contract. Delays and cancellations were also widespread on routes from California Pacific's Carlsbad hub.

Meanwhile, management has had its eye on an even bigger problem: a growing shortage of pilots that is affecting small regional airlines across the country.

The pilot shortage caused California Pacific's latest setback. In late December, it canceled all flights from its Carlsbad hub until further notice and began issuing refunds to customers who had already booked tickets.

The airline says it's working to train more pilots and hopes to resume service in California in February. It has even ordered three additional airplanes so that it can add more routes from its Carlsbad hub in the future. But for the time being, the carrier is focusing its resources on operating its EAS flights between Denver and South Dakota reliably.

The bad news is that California Pacific's bumpy start could doom it. The carrier's business plan is based on appealing to business travelers and leisure travelers from northern San Diego County by offering greater convenience than rivals such as Southwest Airlines that operate at San Diego International Airport.

However, the inconvenience of spending an hour in the car on the way to the airport is far more manageable than the inconvenience of being stranded because your flight is canceled. That's an ordeal that lots of California Pacific Airlines customers experienced in November and December.

Southwest Airlines offers affordable, reliable, frequent, and relatively comfortable service for San Diego-based air travelers. California Pacific's only real competitive advantage relative to Southwest is the convenience factor. For most people, that's not a big enough advantage to justify the risk of booking with an airline that has a terrible track record for reliability.

Many struggling airline start-ups suspend flights with plans to resume service at some later date. Far fewer manage to get back off the ground. With 20/20 hindsight, California Pacific Airlines clearly should have waited until it had enough spare airplanes and plenty of pilots before starting service in Southern California. Now it may take a miracle for the carrier to survive.