Shares of United Parcel Service (NYSE:UPS) fell by 15.4% in December, according to data from S&P Global Market Intelligence. It could have been worse: UPS shares were down more than 20% for the month in mid-December, after archrival FedEx cut 2019 guidance, but UPS did gain some of that back in the final trading days of 2018. Overall, it was an unsettling end to a year in which UPS fell by 18.1% overall, weighed down by tariff talk and concerns about corporate spending.

Investors were worried about UPS well before FedEx's warning, as concerns about Amazon.com's ambitions in logistics, the potential for trade wars to eat into shipping volumes, and company-specific issues such as disruptions and added expenses in the recently completed quarter.

The U.S. imposed a 10% tariff on $200 billion worth of Chinese imports in September but held off a planned escalation to 25% scheduled for Jan. 1. It's still too soon to say whether the tariffs will dramatically cut into international shipping volumes, or simply reroute production away from China and toward other emerging markets, but investors have been in no mood to hang around and find out. 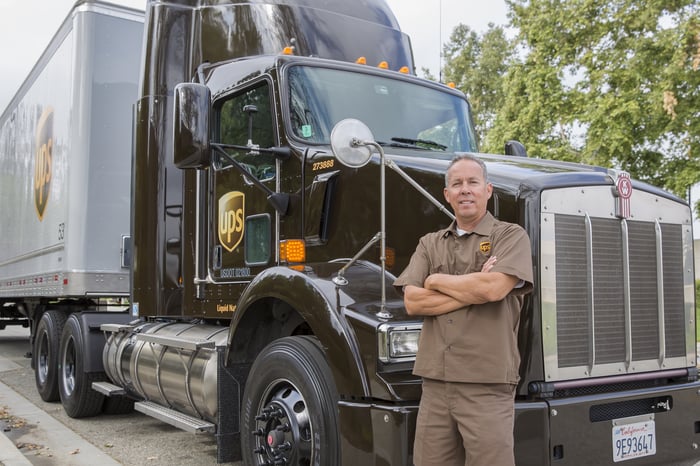 UPS shares have also been under pressure over concerns that a spending increase to handle the holiday rush, plus adjustments related to a near strike, could eat into fourth-quarter results. The company avoided its first work stoppage since 1997 in November, when it won approval of a new deal for its 11,600 freight workers, but UPS in the days leading up to that vote stopped accepting some freight shipments out of fear those deliveries would be halted in the event of a strike.

More broadly, UPS is in a period of heavy spending as it tries to modernize its infrastructure and better compete for e-commerce business. Long criticized for underspending on its network, UPS is spending $7 billion in 2018 on capex after spending just $3 billion in 2016. That investment should pay off down the road but could eat into near-term results.

Looking ahead, a task force appointed by President Trump has recommended the U.S. Postal Service raise its package shipping rates in 2019. That's a double-edged sword for companies like UPS, which could have more flexibility to raise their own rates as a result, but who also often use the Post Office for last-mile delivery.

UPS is a company in transition, and while it's hard to argue with its plan to invest in operations and focus on fast-growing areas including healthcare, life sciences, and business-to-business shipping to counter its exposure to consumer shipping and tariffs, it might take time for those changes to pay off.

In the meantime UPS is not cheap, trading at 15.64 times trailing earnings, versus FedEx's 8.956.

UPS in the early days of e-commerce was seen as a back-door way to play the rise of Internet shopping, and there is still real value in this logistics provider. But given all the uncertainties surrounding the company right now, I'm not ready to declare UPS a bargain even after a rough December.