NVIDIA's (NASDAQ:NVDA) ability to push up prices is one reason why the graphics chip company has been so successful over the past few years. The RTX 20 series, which started to roll out late last year with a few high-end graphics cards, takes that strategy up a notch. These new cards provide much smaller performance gains in standard games than their predecessors did, but dedicated ray-tracing hardware gave NVIDIA justification for substantial price bumps.

The top-of-the-line RTX 2080 Ti, for example, has an MSRP that's 43% higher than its predecessor while providing a 32% performance increase across the games tested by Anandtech in its review.

NVIDIA is betting that its new ray-tracing tech will distract consumers from the dubious value proposition of these new cards. This strategy continues with the company's latest graphics card, the midrange RTX 2060. Announced at CES and available on Jan. 15, the RTX 2060 will be the biggest test yet of NVIDIA's pricing power. 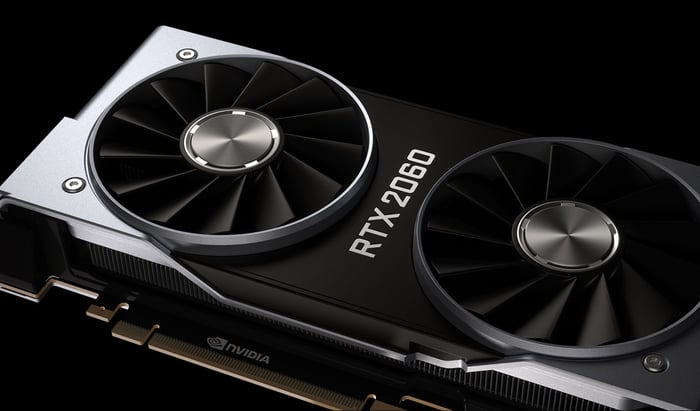 Midrange in name only

NVIDIA claims that the RTX 2060 will be about 60% faster than the GTX 1060 in current titles. That looks about right -- the new card features 50% more CUDA cores and much faster memory. The RTX 2060 features the same ray-tracing tech as the higher-end models, and NVIDIA claims that it's capable of running Battlefield V with ray tracing at 60 frames per second.

The GTX 1060 is an extremely popular graphics card because the price makes it accessible to a wide swath of PC gamers. Steam's hardware and software survey puts it at a 15% share among gamers participating in the survey, making it the leader by far on the PC gaming platform. The next two most popular cards on Steam are the lower-end GTX 1050 Ti and GTX 1050.

It's doubtful the RTX 2060 will ever be anywhere near as popular as the GTX 1060 thanks to its premium price. The ray-tracing tech notwithstanding, NVIDIA is giving gamers much less for their money this time around. The GTX 1060 was 25% more expensive than the GTX 960, but it provided an 85% performance boost, according to Anandtech. The upgrade cycle likely won't be nearly as strong with the RTX 2060.

Opening the door for AMD

NVIDIA has faced minimal competition from Advanced Micro Devices (NASDAQ:AMD) over the past few years, particularly at the high end of the market. AMD's midrange lineup has been more competitive, but NVIDIA has still been dominant at just about every price point. You have to go down to the 17th spot on Steam's graphics card rankings to find an AMD card.

But NVIDIA may be overestimating its pricing power, and that presents an opportunity for AMD. AMD is expected to launch new graphics cards sometime this year. Competing at the high end will be tough, but AMD could win some market share if it can come up with a midrange card that offers a better value proposition than the RTX 2060. That shouldn't be hard, given NVIDIA's lofty pricing.

There's a limit to how far NVIDIA can push up prices. We'll soon learn if that limit has been breached.