CEO Jeff Leiden told the audience at the J.P. Morgan Healthcare Conference exactly what the biotech plans to achieve this year.

Vertex Pharmaceuticals (VRTX -1.17%) CEO Jeff Leiden likes accountability. That's why every year at the J.P. Morgan Healthcare Conference, he starts his presentation with a report card on how Vertex delivered on its commitments from the previous year.

Leiden spoke on Monday at the J.P. Morgan conference. Every box from his 2018 list of objectives was checked off. And he again laid out what Vertex expects to accomplish in the coming year. Here are five key things to expect from the successful biotech in 2019: 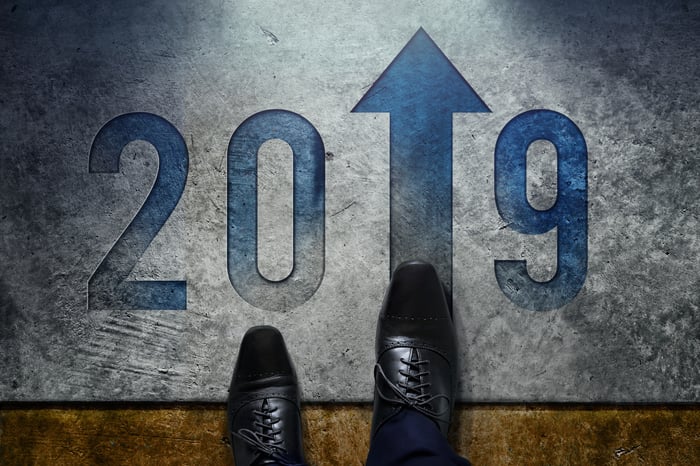 1. File for approval of the first triple-drug cystic fibrosis combo

Leiden likes to talk about "completing the journey" in cystic fibrosis (CF). Vertex already has three highly effective products on the market with Kalydeco, Orkambi, and Symdeko. But those drugs can treat at most only 44,000 of the 75,000 CF patients around the world.

Completing the journey in CF requires new drugs that can target more of the specific genetic mutations that cause CF. That's where Vertex's triple-drug combination therapies come in. The company thinks that these combos hold the potential to treat up to 90% of CF patients.

Leiden said at the conference that Vertex plans to file for Food and Drug Administration approval of the first triple-drug CF combo by the middle of 2019. The biotech has a couple of triple-drug combos to choose from, and will select the best regimen to submit for approval.

Vertex enjoys a virtual monopoly in CF, but the biotech isn't limiting itself to just one disease. Leiden said that his company intends to complete early stage clinical studies in at least two new diseases by the end of 2019.

There are several experimental therapies targeting other diseases that could enable Vertex to achieve its goal. It initiated a phase 1 clinical study of a corrector for alpha-1 antitrypsin deficiency (AATD) last month. Leiden said that AATD "looks, smells, and feels like CF" in terms of the opportunity.

Also, Vertex is working with CRISPR Therapeutics on gene-editing therapies that target the rare blood disorders beta-thalassemia and sickle cell disease. Both diseases are caused by a mutation to the same gene. Enrollment is currently underway for phase 1/2 studies of gene-editing therapies for both indications.

3. Advance at least one new compound into clinical testing

Leiden stated that Vertex will move at least one new compound from research and development into a phase 1 clinical study this year. This is another component of the biotech's strategy to expand beyond CF.

Again, there are several opportunities for Vertex to check off this box by the next J.P. Morgan conference in 2020. In addition to the AATD corrector that recently advanced to early stage clinical testing, Vertex has multiple other molecules targeting AATD in pre-clinical testing.

Perhaps the top prospect, though, is Vertex's focal segmental glomerulosclerosis (FSGS) candidate. The biotech thinks it has a solid approach to treating the rare kidney disease and could begin clinical studies in humans later in 2019.

Leiden said that Vertex would "bolster its pipeline with internal and external assets" in 2019. It's quite possible that the biotech's own research and development could contribute more programs. But Vertex is just as likely to acquire assets from other companies.

Vertex reported a cash stockpile of nearly $2.5 billion as of Sept. 30, 2018, including cash and cash equivalents, and will probably have over $3 billion when it reports its full-year 2018 results. The company is now consistently profitable, so it won't need to use that cash to fund operations. That leaves Vertex with a nice chunk of change that it can use to pick up additional therapies to beef up its pipeline.

Last but certainly not least, Leiden committed Vertex to building its financial strength in 2019. He listed four objectives related to this goal:

All these objectives should be easily attainable for Vertex. But Leiden didn't state exactly how much the company expects to increase revenue. Wall Street analysts expect Vertex will raise revenue by nearly 18% in 2019, a projection that looks reasonable.

One thing that wasn't mentioned

There's also one thing investors can probably expect that Leiden didn't talk about: more stock gains. Vertex's shares jumped nearly 11% in 2018. That might not sound overly impressive, but in a year when the major indexes fell, it's not bad at all. And 2019 should be even better -- because Leiden will probably check off all his boxes yet again.