Please ensure Javascript is enabled for purposes of website accessibility
Log In Help Join The Motley Fool
Free Article
Join Nearly 1 Million Premium Members And Get More In-Depth Stock Guidance and Research
By Daniel B. Kline – Jan 9, 2019 at 7:52AM

The proposal by U.S. Rep. Alexandria Ocasio-Cortez to nearly double the top marginal tax rate would directly impact only one out of every 2,000 or so Americans.

Recently elected U.S. Rep. Alexandria Ocasio-Cortez of New York went on 60 Minutes on Sunday, and called for a 70% marginal tax rate on income over $10 million, with the added revenues to be earmarked toward a variety of social programs. Republican politicians' and right wing pundits' responses to the idea were swift and (unsurprisingly) outraged. Some asserted that the self-identified democratic socialist's plan would disincentivize success, while others simply lambasted it as anti-business, or worse.

In reality, no matter how you feel about the concept of tax hikes in general, it's worth taking a moment to map out what this specific increase would mean, how it would work, and whom it would impact. Let's skip to the best news first: Her proposal, if enacted, would not cost the vast majority of Americans -- nor even the vast majority of the so-called 1% -- a penny. 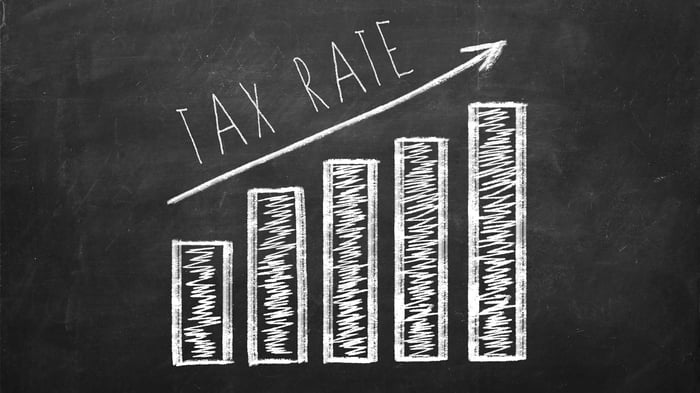 What we mean when say "marginal tax rate"

In the United States, we currently have seven tax brackets. As you earn more, your increased income lifts you into brackets for which you pay increasingly higher percentages in taxes -- but only for the money earned in those brackets. Every filer, for example, pays a 10% rate on the first $9,700 they earn, regardless of how much they earn in total. And the current top rate of 37% only applies to the portion of an individual's adjusted gross income (minus any deductions) that is above $510,000.

High earners, in short, do not pay the top rate on everything they earn. The Motley Fool's Matthew Frankel laid it out as follows. A hypothetical person with taxable income of $100,000 in 2018 would pay:

Again, everyone pays the same tax rate on dollars earned in each bracket -- before tax breaks and other exemptions, of course. That means that Ocasio-Cortez's proposed marginal tax rate of 70% would not merely only impact people who make more than $10 million, it would only apply to whatever portion of their income was in excess of $10 million.

Who would pay more taxes?

Approximately 16,000 Americans earned over $10 million in 2016, the most recent year for which data is available, according to The Washington Post. That's about 0.05% of all households, or 1 in 2,000, Post reporter Jeff Stein noted.

One can't pinpoint with precision how much added tax revenue the Ocasio-Cortez proposal would bring in, but Stein did a rough calculation based on available data that the pool of income being taxed would be about $244 billion. At the current 37% top rate, America's wealthiest pay $90 billion in taxes on that money. At 70%, that figure would rise to $170 billion. The actual revenues might be lower, though, depending on what options were available to those individuals for shielding that money from taxes.

What would the impact be?

This proposal would produce around $80 billion in added revenue annually, or $800 billion over the course of a decade. That would equal about half of the roughly $1.5 trillion in Americans owe in college loan debt, which Ocasio-Cortez supports forgiving.

And even in the context of a roughly $4.4 trillion annual federal budget, $80 billion remains a significant number. It would, for example, cover a healthy share of the estimated $1.09 trillion spent by federal, local, and state governments on welfare and Medicaid in 2018.

Harder to gauge is whether raising the top marginal tax rate might put a damper on economic growth -- a common claim from those on the other side of the political spectrum from Ocasio-Cortez. Their assertion is that higher taxes would give the wealthy less incentive to invest in growth. And if that were the case, her plan would, in theory, shrink tax revenue in other areas.

But history, at least, offers some evidence that should ease those fears: During the 1950s and 1960s, the U.S. economy delivered memorably strong growth -- regardless of top marginal tax rates that ranged from 70% to as high as 92%.