Please ensure Javascript is enabled for purposes of website accessibility
Log In Help Join The Motley Fool
Free Article Join Over 1 Million Premium Members And Get More In-Depth Stock Guidance and Research
By Dan Caplinger – Updated Apr 16, 2019 at 12:03AM

A solid start to 2019 continued, and these stocks stood out on a strong day.

The stock market continued its upward trajectory on Wednesday, as major indexes were higher by around 0.5% to 1%. Many investors focused on the release of minutes from the Federal Open Market Committee's December meeting, which revealed that some members of the group opposed the quarter-percentage-point interest rate hike that the central bank's monetary policy committee made. That in turn suggested future rate increases could be slower in coming. Among individual stocks, Canopy Growth (CGC 4.57%), Chesapeake Energy (CHKA.Q), and Micron Technology (MU -0.88%) were some of the top performers. Here's why they did so well.

Shares of Canopy Growth jumped 13% after receiving positive remarks from stock analysts. Piper Jaffray recommended Canopy, starting coverage on the cannabis producer with an overweight rating. Piper is confident that the marijuana industry has a lot of growth opportunities in the near future, and between medical and recreational sales of cannabis leaf and the widening array of products containing ingredients and chemicals derived from cannabis, the Wall Street company sees Canopy tapping into a global market that could eventually become worth $250 billion to $500 billion. With a price target of $40 per share, Canopy investors could see further upside from here. 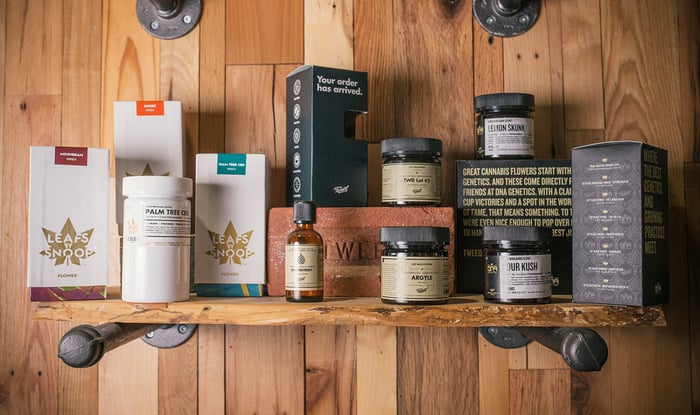 Chesapeake turns up the energy

Chesapeake Energy's stock climbed nearly 13% in the wake of the energy company's release of preliminary fourth-quarter and full-year 2018 results. Chesapeake said that it had successfully regained all the oil production it lost earlier in the year when it sold off its assets in the Utica shale play, with success in its Eagle Ford and Powder River Basin holdings helping to recover the shortfall. Despite conservative calls for 2019 production numbers, Chesapeake is making progress in cutting costs and boosting efficiency. Crude oil prices soared above $52 per barrel today, also lifting prospects for the energy company, but Chesapeake is looking to demonstrate that it can thrive no matter what oil prices do.

Micron gets an upgrade

Finally, shares of Micron Technology picked up 5%. The chipmaker was upgraded from market perform to outperform by analysts at Bernstein. They acknowledge that the threat of a typical cyclical downturn has been responsible for big share-price losses for Micron recently, but the analysts believe that prices for key semiconductor chips will start to rebound later in 2019. If that happens sooner than most investors expect, then the bounce in Micron's earnings could result in a longer-term jump for the share price.