Shares of American Airlines (NASDAQ:AAL) are down 5.3% as of 1 p.m. EST -- and that's the good news. The bad news is that, at one point this morning, the stock was down closer to 11%, and sellers at that point will have suffered losses twice as big as what we're seeing now.

The plunge comes after the carrier filed an "investor update" with the Securities and Exchange Commission, advising that fourth-quarter total revenue per available seat mile (TRASM) is probably going to be up only 1.5% in comparison to last year's Q4. 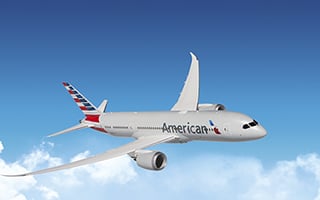 Shouldn't any increase at all be at least partially good news, though? Perhaps, but here's the thing: American Airlines had previously forecast that TRASM would increase between 1.5% and 3.5% this past quarter. The fact that it's looking likely to rise 1.5% means it may still reach that guidance range, but only by its fingernails.

American blamed "a lower than anticipated improvement over a strong fourth quarter of 2017 in the domestic market" for the weak results -- an explanation that really didn't reveal much. On the other hand, management also noted that available seat miles are likely to rise less than expected, to only 68.3 billion instead of the expected 68.4 billion, which suggests American may already be taking steps to limit capacity and thus reduce pressure on prices (as well as revenue and profits).

Speaking of profits, management warned that it's likely to end this year with earnings per share of $2.92-$3.12 and "adjusted" earnings of $4.40-$4.60. That latter number, which is the one Wall Street focuses on, appears all but certain to fall short of analysts' hoped-for $4.62 per share.

Long story short, that's probably the real reason its shares are down today: American is going to miss earnings.