Shares of hotel franchisor and operator Marriott International (NASDAQ:MAR) fell 20% in 2018, according to data from S&P Global Market Intelligence.

Marriott's stock was perhaps due for some profit taking last year, having rocketed 64% higher in 2017. However, selling pressure became more pronounced in the second half of 2018 due to a confluence of factors.

First, the company's August integration of the Marriott and Starwood loyalty programs, which had been pending since the two chains merged in late 2017, was stymied by technical glitches, temporarily frustrating customers of both platforms. The issues have been largely resolved.

Second, management signaled to investors that its North American growth might slow in 2019 when it released its third-quarter 2018 earnings report on Nov. 5. The company's preliminary estimates for 2019 call for 1% to 2% year-over-year growth in revenue per available room, or RevPAR.

Finally, Marriott revealed on Nov. 30 that it had suffered a hacking incident that it estimated compromised up to 500 million guests. The company told investors that it had discovered a breach of the Starwood guest reservation database in early September.

The database appears to have been breached since 2014, even before the merger of the Starwood and Marriott chains. Stolen details included personal customer information, and in some cases, encrypted payment information. A volatile December in the broader markets only increased pressure on Marriott shares after this revelation. 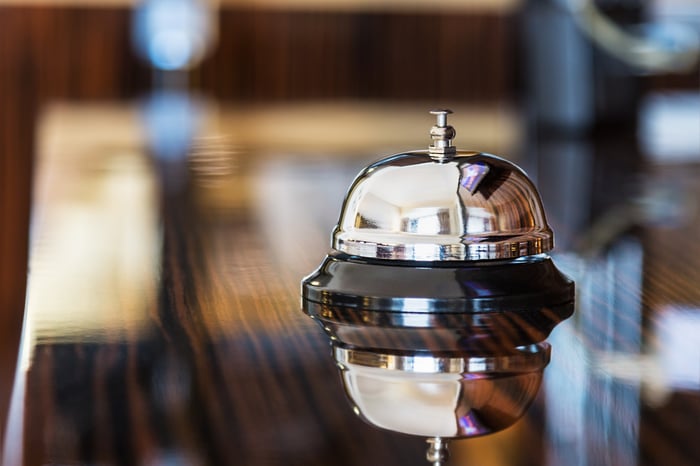 Marriott has entered 2019 with some hope for a share-price rebound. On Jan. 4, 2019, the company updated investors on the data breach, lowering its estimated upper bound of affected customers to 383 million.

More importantly, the company stated that although 8.6 million encrypted payment cards were involved in the incident, the unauthorized third party wasn't able to gain access to encrypted payment information to utilize the cards.

The company will next report earnings in mid-February. At that point, investors can expect more detail on the financial impact of the breach, as well as an update on RevPAR -- and earnings estimates -- for full-year 2019.